We didn’t just add FMC/TFM to an OmniScan flaw detector — we also made it better. In this blog post, we discuss the top three ways we improved FMC/TFM. But first, let’s discuss the basics.

Full matrix capture (FMC) is a data acquisition strategy that acquires every possible transmit and receive combination for an array of transducers — in other words, the complete acoustic information provided by all the elements of the phased array probe. Each element fires individually, while all the other elements of the array receive, or “listen” to, the returned signals. This generates a matrix of elementary A-scans where every pixel in the region of interest is a focal point. Unlike phased array acquisition, there is no time delay, or beam steering, performed using programmed focal laws.

Total focusing method (TFM) processing makes sense of the data acquired by the FMC. The TFM algorithms use specific variables to sort the extensive A-scan data into wave sets. These wave sets — or propagation modes — represent a path of ultrasound waves from the transmitter to an image pixel and back to the receiver (including reflections), defined by the types of waves for each leg of that path, either transverse (T) or longitudinal (L).

In the OmniScan X3 flaw detector, when the probe is scanned along the part, the FMC data is recorded and encoded while the TFM processes it and displays the results live per wave set (up to four wave sets at a time). The same set of FMC data can be reprocessed multiples times to generate different reconstruction parameters.

Identifying a flaw’s orientation is easier, even for the untrained eye

Under certain conditions, the TFM views provide highly focused images of flaws in their true geometrical position in the part. How true depends on a few factors, including the probe and wedge, the scan method, and the propagation mode (or wave set) used. If you need to report to colleagues who are unfamiliar with this technology, helping them decipher the geometrical orientation of flaws is easier.

Is TFM better than phased array?

The total focusing method versus phased array debate is not cut and dry. The FMC/TFM technique offers many advantages for some applications, whereas phased array may be more advantageous for others. Having a high-performance instrument with high-quality images that offers both technologies is your best option.

Since the TFM focuses everywhere evenly, it can greatly improve your ability to detect very small defects that are nearly invisible with standard phased array. That said, the FMC/TFM inspection functions at a slower scan rate than phased array, and it is focusing power only works in the near field. Phased array also produces excellent images, which are often similar in quality to what TFM can provide. A detailed point-by-point pros and cons discussion can be found on our FAQs about TFM page.

The OmniScan X3 flaw detector’s FMC/TFM acquisition and processing has been designed with several innovative features that further enhance the images it provides.

Here are the three most notable imaging enhancements:

The OmniScan X3 flaw detector’s advanced TFM processing includes a feature that, by combining the individual wave ripples associated with TFM reconstruction, heightens the clarity of the resulting image. The envelope also lowers the effect of reconstruction artifacts.

Turn on the envelope and even very small defects, such as high-temperature hydrogen attack (HTHA), become more obvious. The below example shows HTHA defects with envelope on (left) and envelope off (right). 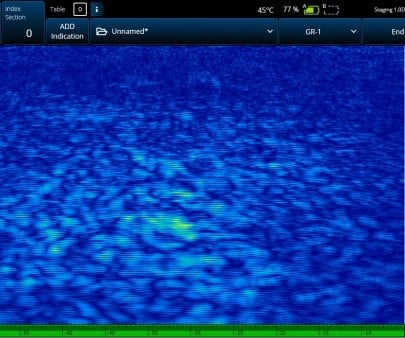 The image clearly showing the HTHA flaw was acquired using a stationary (or still) probe and an L-L wave set, which are optimal conditions for achieving a true-to-geometry image in a part using the TFM.

With a typical TFM system, you assume that the region of interest (ROI) is completely covered by the probe’s acoustic waves. But variables such as the part thickness, the sound velocity, and the probe frequency can impact the acoustic influence levels within the ROI.

To ensure the flaws you’re targeting are detected with a good signal-to-noise ratio (SNR), the OmniScan X3 flaw detector is equipped with a feature called the acoustic influence map, or AIM.

When you’re creating your TFM scan plan onboard the flaw detector, the AIM modeling tool shows you the effective acoustic influence in the ROI of each propagation mode (or wave set). In the screen shots below, you can see the coverage provided by the TT-L (Figure 2) and TT-TT (Figure 3) TFM wave sets. 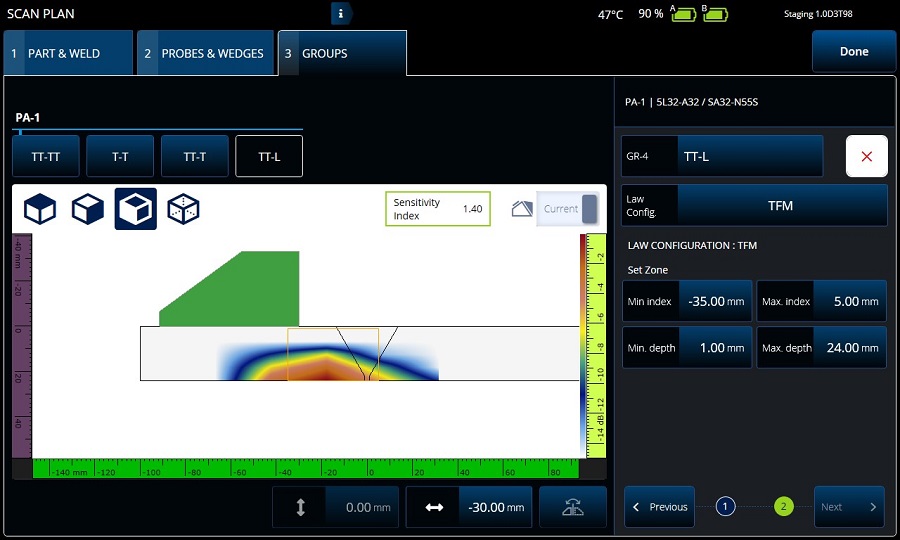 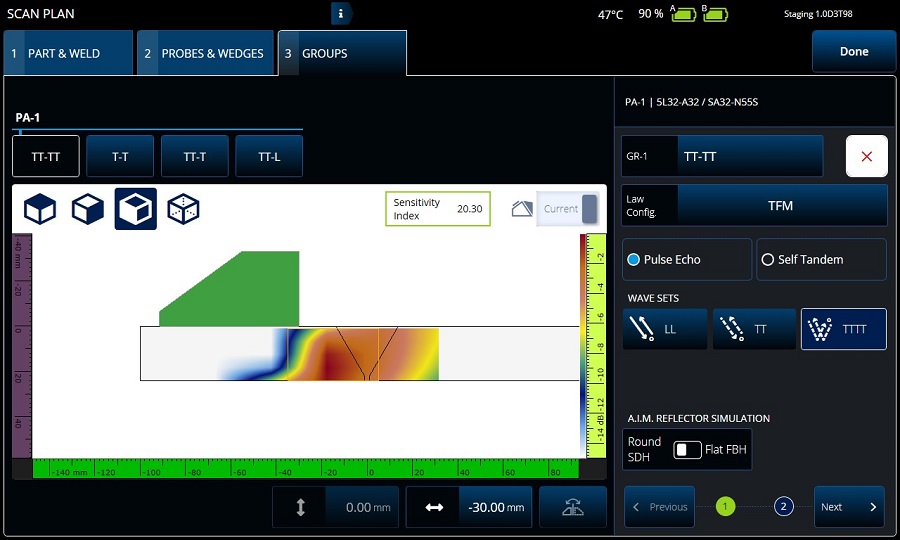 The colors of the AIM amplitude map give you a clear indication of the coverage the TFM wave sets will provide in the ROI zone.

This tool helps you pick the right TFM wave sets to use for your inspection.

3. On-screen comparison of up to four wave sets

During an inspection, you can compare up to four wave set images on the flaw detector. Comparing these wave sets offers complementary information that can ease detection tasks such as flaw sizing.

With one wave set, you may see the tip diffraction more clearly, and another may offer a better view of the corner trap, then a third (typically the TT-T wave set in the case of welds) gives you the profile of the flaw in a nearly geometrically accurate position.

You can use this combination of wave set views to place your sizing cursors with more confidence. 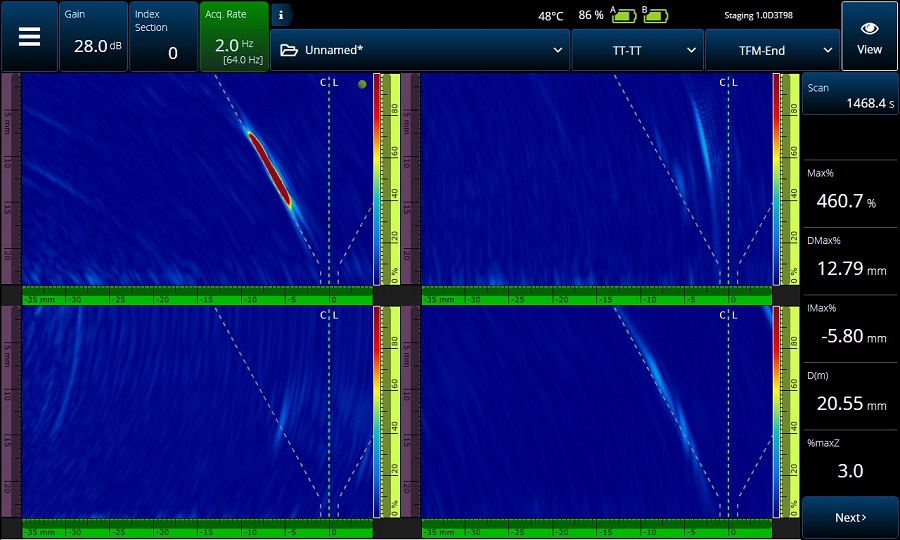 Confidence you can see

The combination of these TFM features makes the OmniScan X3 flaw detector a powerful tool, particularly when combined with its advanced phased array capabilities. The main advantage is that you have more diverse and informative data to help you confirm your analysis and make your calls with more certainty.

To learn more about advantages that are offered by the FMC/TFM and phased array techniques for different inspection applications, check out the links below.

By posting a comment you confirm that you have read and accept our Posting Rules and Terms of Use.
Advertisement
RELATED ARTICLES
TFM and other major advantages of the OmniScan X3 Flaw Detector for NDT inspectors: A customer review
What are Ultrasonic Flaw Detectors?
Video: DIY Tractor Beam
Nondestructive Examination Tools: An Introduction
Testing Composite Aircrafts
Advertisement