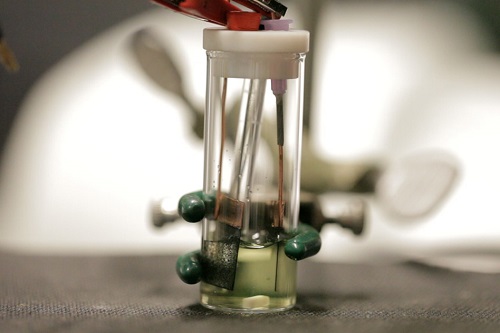 The new method can remove extremely low levels of unwanted compounds such as pesticides, chemical waste and pharmaceuticals from water. Image credit: MIT

There is one topic that is universally agreed upon: everyone wants clean water. Yet, methods to purify and remove contaminants from water can be a chemically-intensive and energy draining process.

Researchers at MIT have developed an alternative for removing extremely low levels of unwanted compounds from water using an electrochemical process to selectively remove organic contaminants such as pesticides, chemical waste products and pharmaceuticals at very tiny but dangerous concentrations.

The process also addresses issues with electrochemical separation methods such as acidity fluctuations and losses in performance that result from competing surface reactions. Current systems to deal with these contaminants include membrane filtration, which is expensive and has a limited effect on the pollutants. Other systems such as electrodialysis and capacitive deionization require high voltages and tend to produce side reactions.

In the system developed by MIT, water flows between chemically treated surfaces that serve as positive and negative electrodes. The electrodes are coated with Faradaic materials, which undergo reactions to become positively or negatively charged. These materials then are “tuned” to bond to a specific type of pollutant molecule. MIT was able to bind the materials to ibuprofen and various pesticides that were found in water.

The process allows particles to be removed even at parts-per-million concentrations and by using functionalized electrodes on both the positive and negative sides, researchers say they were able to eliminate any side reactions.

“The system could be used for environmental remediation, for toxic organic chemical removal, or in a chemical plant to recover value-added products, as they would all rely on the same principle to pull out the minority ion from a complex multi-ion system,” says Xiao Su, a postdoc student at MIT and lead in the research.

While the system is currently highly selective, it could open the door to an improved system with multiple stages to deal with a variety of compounds in sequence.

“Such systems might ultimately be useful for water purification systems for remote areas in the developing world, where pollution from pesticides, dyes, and other chemicals are often an issue in the water supply,” Su says. “The highly efficient, electrically operated system could run on power from solar panels in rural areas for example.”

MIT says the system works at benign low voltages and pressures, in contrast to other electrochemical systems that require high pressure and require additional chemicals.

The next step is to scale up the prototype devices in the lab and improving the chemical robustness.

The full research report can be found in the journal Energy & Environmental Science.

By posting a comment you confirm that you have read and accept our Posting Rules and Terms of Use.
Advertisement
RELATED ARTICLES
Low Energy Desalination with Battery Electrode Deionization
Researchers give biofuel production effluents a jolt
Copper based electrode could produce fuel
Filterless Water Desalination Achieved with Shock Electrodialysis
Study Investigates Contaminants in Drinking Water
Advertisement