Chemical engineers at the Massachusetts Institute of Technology (MIT) have developed a desalination system that uses an electrically driven shockwave in place of filters, creating potable water at reduced expense and operational difficulty.

In the process, called shock electrodialysis, water flows through a porous material made of glass particles, called a frit, with membranes or electrodes sandwiching the porous material on each side. When electric current flows through the system, the salty water divides into regions where the salt concentration is either depleted or enriched.

When the current is increased, it generates a shockwave between the two zones, dividing the streams and allowing the fresh and salty regions to be separated by a simple physical barrier at the center of the flow. 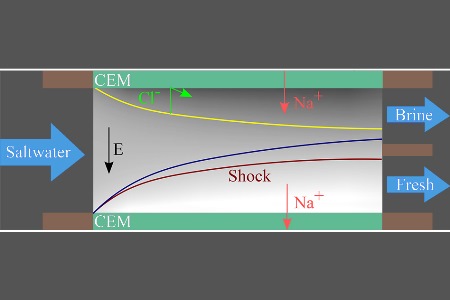 (Click to enlarge.) A shockwave (red line) is generated in salty water flowing through a porous medium with a voltage applied to membranes (green) at each side of the vessel. Image credit: MIT.Even though the system can use membranes on each side of the porous material, the water flows across those membranes, not through them. The MIT researchers say that means they are not as vulnerable to fouling—a buildup of filtered material—or to degradation due to water pressure, as happens with conventional membrane-based desalination, including conventional electrodialysis.

"The salt doesn’t have to push through something," says Martin Bazant, professor of chemical engineering and mathematics, who led the research. The charged salt particles, or ions, “just move to one side."

The underlying phenomenon of generating a shockwave of salt concentration was discovered a few years ago by a group led by Juan Santiago at Stanford University. However, that finding, which involved experiments with a microfluidic device and no flowing water, was not used to remove salt from the water, says Bazant.

The MIT system, by contrast, is a continuous process, using water flowing through low-cost porous media that could be relatively easy to scale up for desalination or water purification.

One possible application would be in cleaning wastewater generated by hydraulic fracturing. This water tends to be salty and sometimes contains trace amounts of toxic ions, so finding a practical and inexpensive way of cleaning it would be highly desirable. Shock electrodialysis not only removes salt, but also a variety of other contaminants. Due to the electrical current passing through, it may also sterilize the stream.

According to the researchers, shock electrodialysis, at least initially, would not be competitive with methods such as reverse osmosis for large-scale seawater desalination. However, unlike other approaches to desalination, the process requires little infrastructure, so it might be useful for portable systems in remote locations or for emergencies where water supplies are disrupted.

The research produced both a laboratory demonstration of the process in action and a theoretical analysis that explains why the process works, Bazant says. The next step is to design a scaled-up system that can go through practical testing.

By posting a comment you confirm that you have read and accept our Posting Rules and Terms of Use.
Advertisement
RELATED ARTICLES
Solar-Powered Desalination for Off-Grid Villages
MIT System Uses Electrodialysis to Clean Water
Shock treatment for nuclear plant wastewater
Serving a Thirsty World: Trends in Desalination
Video: A portable approach to seawater desalination
Advertisement