How a Spider Web Design Can Help Fight Cancer

A biosensor is a device that uses a living organism or biological molecules, such as enzymes or antibodies, to detect the presence of chemicals. One of the most promising applications of biosensors is in the fight against cancer; while radiologic imaging can only send energy through the body to take interior pictures, biosensors are capable of directly testing the malignant power of a tumor. 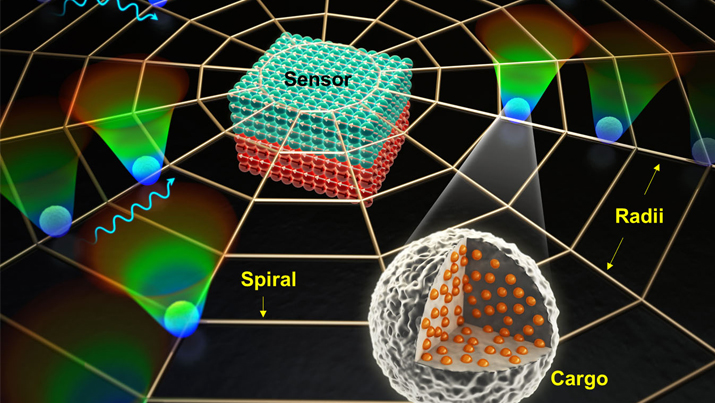 A schematic of a biosensor platform resembling a spider web. Image credit: DGISTAt the Korean Daegu Gyeongbuk Institute of Science and Technology, or DGIST, a research university in Korea, a team led by Professor CheolGi Kim has used the design of a spider web—a structure marveled in nature for its ability to detect the slightest movement—to develop a biosensor platform that sets a new bar for detection speed.

The sensing capability of a biosensor is dependent on both the resolution of the sensor and the movement and reaction rate of molecules toward the sensor. While many research groups have been working on improving biosensor resolution through the development of nanomaterials, Prof. Kim and his team set out to address the slow movement of molecules inherent in diffusion-based transport.

Using an external magnetic field and an ultra-sensitive magnetic sensor, the researchers found they could easily control and detect the movement of biomolecules labeled with superparamagnetic particles. A spider web-shaped micro-magnetic pattern was employed to move the particles toward the center of the biosensor, at speeds 20 times faster than the norm.

Prof. Kim has stated plans to use the platform for both early diagnosis and recurrence diagnosis of diseases such as cancer.

The team’s development of this novel spider-web architecture, composed of radii and spiral tracks with magnetic properties for directional transportation of particles, has implications for multiple fields, including cell manipulation and separation, bioassays and biomechanics.

The full study has been published in NPG Asia Materials.

Re: How a Spider Web Design Can Help Fight Cancer
#1

/In the Newtonian World