Ah, solar! Energy from our home star can be used to heat, cool, and light homes and businesses and not even break a sweat. That's because more energy from the sun falls on the earth in one hour than is used by everyone in the world in one year.

The U.S. Energy Department's Energy Information Administration (EIA) says that on a percentage basis, solar power is expected to be the fastest growing renewable energy source, with total utility-scale capacity increasing by 44% from the end of 2016 to 31 GW at the end of 2018. With that level of growth, EIA says, solar is expected to account for 1.4% of total utility-scale electricity generation in 2018.

(Watch a video from DOE on solar basics.)

In early March, the Solar Energy Industries Association (SEIA) said that the U.S. installed 14,800 megawatts (MW) of solar PV in 2016 to reach 42.4 gigawatts (GW) of total installed capacity. It says the industry could nearly triple in size over the next five years to surpass 100 GW of installed capacity nationwide. 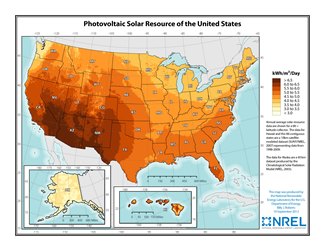 (Click to enlarge) The National Renewable Energy Laboratory maps solar PV potential in the U.S. In fact, the sun is responsible for creating most of the energy we already use on earth. Wind power is the direct result of the sun warming the atmosphere and causing air currents and weather. The water cycle that helps to replenish hydroelectric resources depends on sun-generated weather events.

(See a dynamic version of the NREL solar PV map.)

Less obvious, perhaps, is the sun's role in fossil fuels such as petroleum, natural gas, and coal. Both can be thought of as super-long-term solar energy storage vehicles. Plants and animals that lived and died millions of years ago thrived on solar energy and went on to create fossil fuels. The relatively rapid release over the past 250 years of these resources' stored carbon through industrial processes is a primary concern underlying climate change.

For practical purposes, this series of articles will focus on three primary technologies that are most commonly used to harness solar energy: photovoltaics (PV), which directly convert light to electricity; concentrating solar power (CSP), which uses heat from the sun (thermal energy) to drive utility-scale turbines; and heating and cooling systems, which collect thermal energy to provide hot water and air conditioning.

This article will focus on PV technology.

At a basic level, solar cells, also called photovoltaic (PV) cells, convert sunlight into electricity. How? By converting light (photons) to electricity (voltage) through a process called the PV effect.

(Learn more about solar energy products and suppliers through Engineering360.)

This effect was observed as early as 1839 by 19-year-old Alexandre Edmund Becquerel, a French physicist who studied the solar spectrum. In 1954, Bell Labs in the U.S. introduced the first solar PV device capable of producing a useable amount of electricity. The Bell Labs scientists found that silicon (an element found in sand) created an electric charge when exposed to sunlight. 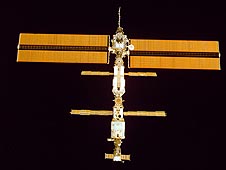 The International Space Station is powered by solar energy.By the end of the decade, solar cells were being used in a variety of small-scale scientific and commercial applications. Watches and calculators were some of the first consumer products powered by solar PV. As the space age began, solar panels were used to generate electricity for satellites and today's International Space Station. (Each of the space station's eight solar arrays is 112 feet long by 39 feet wide.)

The energy crisis of the 1970s saw growing interest in using solar cells to produce electricity in homes and businesses. However, prohibitive prices (nearly 30 times higher than the current price) made large-scale applications impractical.

Traditional solar cells are usually flat-plate, and generally are the most efficient. Second-generation solar cells called thin-film solar cells are made from amorphous silicon (the non-crystalline form of silicon also used for thin-film transistors in LCD displays) or nonsilicon materials such as cadmium telluride (a stable crystalline compound formed from cadmium and tellurium).

When light shines on a PV cell, it may be reflected, absorbed, or pass right through it. The PV cell is composed of semiconductor material, which combines some properties of metals and some properties of insulators. This combination enables it to convert light into electricity.

When light is absorbed by a semiconductor, photons of light can transfer their energy to electrons, allowing the electrons to flow through the material as electrical current. The current flows out of the semiconductor to metal contacts and then makes its way out to power homes, businesses, and even the electric grid. 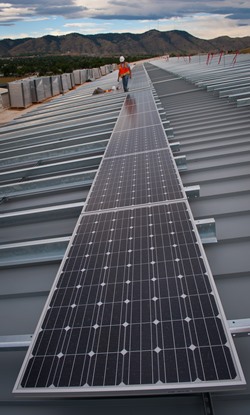 Typical PV cells produce no more than 1 or 2 Watts. This is boosted by using modules that can be linked to form arrays. Credit: NRELA single PV device is known as a cell. An individual PV cell typically produces no more than 1 or 2 watts of power. To make them useful at a large scale, PV cells are connected in chains to form units known as modules or panels. Modules can be used alone, or several can be connected to form an array. This modular structure means that PV systems can be built to meet almost any electric power need, from a single house to a utility scale solar farm.

Not all of the sunlight that reaches a PV cell is converted into electricity. Multiple factors play roles in limiting a cell's ability to convert the sunlight it receives. Improving conversion efficiency helps make PV technologies cost-competitive with conventional sources of energy.

Wavelength—Light is composed of photons—or packets of energy—that have a wide range of wavelengths and energies. The sunlight that reaches the earth's surface has wavelengths from ultraviolet, through the visible range, to infrared. When light strikes the surface of a solar cell, some photons are reflected and others pass through. Some of the absorbed photons have their energy turned into heat. Others have just the right amount of energy to separate electrons from their atomic bonds to produce charge carriers and electric current.

Temperature—Solar cells generally work best at low temperatures. Higher temperatures cause the semiconductor properties to shift. This results in a slight increase in current, but a much larger decrease in voltage. Extreme increases in temperature can damage the cell and other module materials, shortening operating lifetimes. Because much of the sunlight shining on cells becomes heat, proper thermal management improves both efficiency and lifetime.

Reflection—A cell's efficiency can rise by minimizing the amount of light reflected away from the cell's surface. Untreated silicon reflects more than 30% of incident light. As a result, anti-reflection coatings and textured surfaces help decrease reflection. Because of this, a high-efficiency cell will appear dark blue or black.

Researchers measure the performance of a photovoltaic (PV) device to predict the power the cell will produce. Electrical power is the product of current and voltage. Current-voltage relationships measure the electrical characteristics of PV devices.

If a certain "load" resistance is connected to the two terminals of a cell or module, the current and voltage being produced will adjust according to Ohm's law (the current through a conductor between two points is directly proportional to the potential difference across the two points). Efficiencies result by exposing the cell to a constant, standard level of light while maintaining a constant cell temperature, and measuring the current and voltage that are produced for different load resistances.

There are a variety of different semiconductor materials used in solar cells.

Silicon is the most common material used in solar cells, and represents around 90% of the modules sold today. It is also the second most abundant material on earth (after oxygen) and among the most common semiconductors used in computer chips. Crystalline silicon cells are made of silicon atoms connected to one another to form a crystal lattice. This lattice provides an organized structure that makes conversion of light into electricity more efficient.

Solar cells made out of silicon currently provide a combination of high efficiency, low cost, and long lifetime. Modules are expected to last for 25 years or more, still producing more than 80% of their original power after this time. 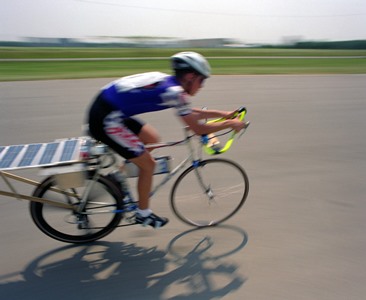 Solar PV helped power this bike in a 2012 race. Credit: Warren Gretz/NRELThin-film solar cells are made by depositing one or more thin layers of PV material on a supporting material such as glass, plastic, or metal. Two main types of thin-film PV semiconductors are on the market today: cadmium telluride (CdTe) and copper indium gallium diselenide (CIGS). Both materials can be deposited directly onto either the front or back of the module surface.

CdTe is the second-most common PV material after silicon and enables low-cost manufacturing processes. This makes them a cost-effective alternative although their efficiencies aren't quite as high. CIGS cells have favorable electronic and optical properties, although the complexity of combining four elements makes the transition from lab to manufacturing challenging.

Organic PV, or OPV, cells are composed of carbon-rich polymers and can be tailored to enhance a specific function of the cell, such as sensitivity to a certain type of light. This technology has the theoretical potential to provide electricity at a lower cost than silicon or thin-film technologies. OPV cells are only about half as efficient as crystalline silicon and have shorter operating lifetimes, but could be less expensive to manufacture in high volumes. They also can be applied to a variety of supporting materials, making OPV able to serve a wide variety of uses.

Concentrating PV, also known as CPV, focuses sunlight onto a solar cell by using a mirror or lens. By focusing sunlight onto a small area, less PV material is required. PV materials become more efficient at energy conversion as the light becomes more concentrated, so the highest overall efficiencies are obtained with CPV cells and modules. However, more expensive materials, manufacturing techniques, and mechanical soalr tracking equipment typically are required.

The cost of PV has dropped as the industry has scaled up manufacturing and improved the technology with new materials. Installation costs have come down too with more experienced and trained installers. However, the U.S. remains behind other nations that have stronger national policies to shift energy use from fossil fuels to solar. Globally, the U.S. is the fourth largest market for PV installations behind Germany, Japan, and Spain.

According to the SEIA, during the fourth quarter of 2016 the average price for residential rooftop systems in the U.S. was $2.89/Wdc. That was a 3% drop from the third quarter at $2.98/Wdc. Year-over-year residential system pricing fell 17%.

Utility fixed-tilt and single-axis tracking projects in saw average pricing of $1.06/Wdc and $1.18/Wdc, respectively, during the fourth quarter. That represented a 2.8% and 2.5% price reduction from the third quarter of 2016, SEIA says. Within the utility-scale segment, pricing for fixed-tilt and single-axis tracking systems fell by 20% and 23%, respectively, year-over-year.

By posting a comment you confirm that you have read and accept our Posting Rules and Terms of Use.
Advertisement
RELATED ARTICLES
Hybrid Solar Cell Yields Both Hydrogen and Electricity
Light-Harvesting Gel Could Double Solar Panel Efficiency
Lower-Cost Solar Cells Without Doping
Putting pressure on perovskite solar cells
Polymer solar cells: A flexible and efficient photovoltaic technology
Advertisement