An international research team has demonstrated that altering the form of platinum nanoscale wires from a smooth surface to a jagged one can dramatically reduce the amount of precious metal used as catalysts in fuel cells and lower their cost.

Fuel cells use hydrogen combined with atmospheric oxygen to produce electricity, with water vapor as the only byproduct. As such, they hold great promise as a clean and renewable technology for vehicles. However, because fuel cells are reliant on platinum as a catalyst for the chemical reaction that powers them, the fuel cells and the cars powered by them have remained too expensive for widespread adoption. 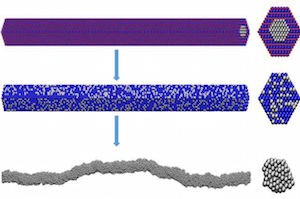 Jagged platinum nanowires are made by removing nickel from a platinum-nickel alloy. Image credit: UCLA.Now, researchers led by Yu Huang, professor of materials science and engineering, and Xiangfeng Duan, professor of chemistry and biochemistry, both at UCLA, have shown how using jagged-shaped platinum nanowires increases their efficiency as a catalyst. Manufacturing nanowires with jagged surfaces, rather than smooth, creates new types of highly active sites that can significantly reduce the reaction barrier and speed up the oxygen reduction reaction.

Moreover, the thin body of the nanowire ensures that most of the platinum atoms are exposed on the surface to actively participate in the reaction instead of being embedded inside the body and making little contribution to the reaction. The net result is a reduction in the amount of platinum used, and therefore the cost, while simultaneously ramping up the reaction efficiency and power generation rate.

The researchers created the wires in a two-step process. First, they used a heating process to create nanowires of a platinum-nickel alloy. Then, they used an electrochemical process to selectively remove the nickel atoms from the alloy nanowires, leaving what looks like fuzzy wires composed only of platinum.

Following testing, the researchers found that the jagged nanowires made the reaction much more efficient, delivering 50 times more current (power) compared with the same amount of commercial catalyst.