Scientists at the University of Missouri (MU) have developed noninvasive procedures to identify individuals who have been exposed to uranium anytime in the past year and thus could potentially be smuggling nuclear materials.

Determining if an individual has handled nuclear materials, such as uranium or plutonium, is a substantial challenge to national defense agencies. The standard protocol to detect uranium exposure is through a urine sample; however, urine is able to identify only those who have been recently exposed. 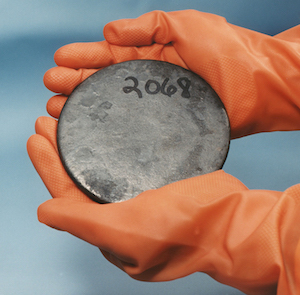 Determining if an individual has handled nuclear materials, such as this highly enriched uranium, is a substantial challenge to national defense agencies. Image credit: DOE.

“We are working to develop a tool that law enforcement agencies in nuclear proliferation or smuggling investigations can use to identify individuals who have handled special nuclear material,” says John Brockman, associate professor of research in the MU Research Reactor Center. “The goal of our research was to determine if hair, fingernail clippings and toenail clippings could be used to better detect uranium exposure.”

Brockman collected all three types of clippings from workers in nuclear research facilities around the country. Testing procedures developed by Brockman and his team were able to identify exposure to both natural and man-made sources of uranium.

“Our technique was not only able to determine uranium exposure, but also the specific isotopes the individual has handled within the last year,” Brockman says. “We were able to identify exposure to enriched uranium, which is used to make both nuclear fuel and weapons, and U-236, which is suggestive of nuclear fuel reprocessing.”

With this discovery, the researchers say, law enforcement officials could use specialized equipment to identify individuals who have been exposed to special nuclear material within the past 48 hours.

Brockman is looking to expand his analysis with the national human radiobiological tissue repository to provide further insight into how hair and nail samples could be used to monitor exposure to special nuclear material.

By posting a comment you confirm that you have read and accept our Posting Rules and Terms of Use.
Re: Detecting Exposure to Nuclear Materials
#1

thanks a lot for this valuable new method, it is very important to me to Know the

I am working in Jordan Atomic Energy commission , Section Head of Nuclear Analytical

Chemistry Department, I am Know responsible for the measurement of workers exposure to the employee in our Jordan Research and Training Reactor, and the people who are working in the uranium Exploration and Extraction in Jordan.

I am using ICP-MS techniques( Quantitative and Isotope Ratio ).

It will highly appreciated if you tell me how can I get the detail steps in the collection and preparation the samples .

either If I can get it free or to pay

with lots of regard