Shipping May Have Genetic Consequences for Marine Species

New research has found that human activities such as shipping are having a noticeable impact on marine species and their native habitat—potentially disrupting genetic patterns that have been shaped over long periods of time.

University of Southampton, UK, researchers investigated the genetics of a native marine invertebrate species (the tunicate Ciona intestinalis) in the English Channel, an area with a high prevalence of shipping. Ciona intestinalis has restricted natural dispersal capabilities and is most often reported in artificial habitats, such as marinas, where it has been transported by human activities. 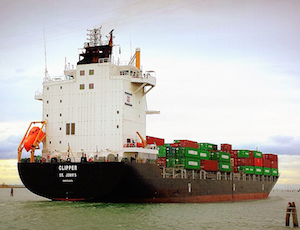 Researchers investigated the genetics of Ciona intestinalis in the English Channel, an area with a high prevalence of shipping. Image credit: Pixabay.Collecting specimens between June and December 2014 from 15 different locations on the English and French coasts, they examined sections of DNA called microsatellites—areas that contain repeating sequences of two to five base pairs. They found a mosaic of genetic patterns that could not be explained by the influence of natural or anthropogenic means alone.

“Marine species are expected to develop populations whereby geographically close populations are more genetically similar than geographically distant populations," notes lead author and PhD student Jamie Hudson. "However, anthropogenic activities (environmental change caused by humans) such as shipping promote the artificial transport of species and bring distant populations together, leading to the crossing of individuals and therefore genetic material. The disruption of pre-modern genetic patterns through anthropogenic activities is an unprecedented form of global change that has unpredictable consequences for species and their native distributions.”

The researchers found that Ciona intestinalis from some locations exhibited a "shuffling" of genetic material, as expected by human-mediated transport (boats can travel farther distances than the larvae). Unexpectedly, however, some of the populations exhibited the opposite pattern (some populations were not genetically similar), despite there being evidence of artificial transport between these locations.

Taken together, the researchers found dissimilar patterns of population structure in a highly urbanized region that could not be predicted by artificial transport alone. They conclude that anthropogenic activities alter genetic composition of native ranges, with unknown consequences for species' evolutionary trajectories.

By posting a comment you confirm that you have read and accept our Posting Rules and Terms of Use.
Advertisement
RELATED ARTICLES
Study: Oil and Gas Rigs Protect Corals
Field Trials with Genetically Modified Algae Deemed Successful
Researchers Outfit Robots with Spears to Protect Coral Reefs from Invasive Species
Researchers Using eDNA to Detect the Presence of Great White Sharks in Local Waters
Solar Energy Systems as the Savior of Pollinator Populations
Advertisement