The Day a Solar Storm Almost Brought on Nuclear War

A solar storm that jammed radar and radio communications at the height of the Cold War could have led to a disastrous military conflict if not for the U.S. Air Force’s budding efforts to monitor the sun’s activity, a new study finds.

On May 23, 1967, the Air Force prepared aircraft for war, thinking the nation’s surveillance radars in polar regions were being jammed by the Soviet Union. Just in time, military space weather forecasters conveyed information about the solar storm’s potential to disrupt radar and radio communications. The planes remained on the ground, and the U.S. avoided a potential nuclear weapon exchange with the Soviet Union, according to the new research. 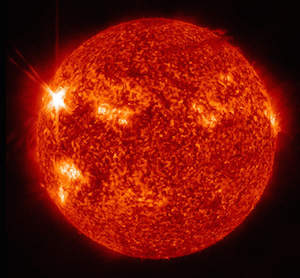 Solar storms can disrupt radar and radio communications. Image credit: NASA. Retired U.S. Air Force officers involved in forecasting and analyzing the storm collectively describe the event publicly for the first time in a paper accepted for publication in Space Weather, a journal of the American Geophysical Union.

The storm serves as a reminder of why geoscience and space research are essential to U.S. national security, according to Delores Knipp, a space physicist at the University of Colorado in Boulder and lead author of the new study. "Had it not been for the fact that we had invested very early on in solar and geomagnetic storm observations and forecasting, the impact [of the storm] likely would have been much greater,” she says.

By the 1960s, a branch of the Air Force’s Air Weather Service was monitoring the sun routinely for solar flares—brief intense eruptions of radiation from the sun’s atmosphere. Solar flares often lead to electromagnetic disturbances on Earth, known as geomagnetic storms, which can disrupt radio communications and power line transmissions.

On May 18, 1967, an unusually large group of sunspots with intense magnetic fields appeared in one region of the sun. As the solar flare event unfolded five days later, radars at all three Ballistic Missile Early Warning System (BMEWS) sites in the far Northern Hemisphere were disrupted. These radars, designed to detect incoming Soviet missiles, appeared to be jammed. Any attack on these stations—including jamming their radar capabilities—was considered an act of war.

Retired Colonel Arnold Snyder, a solar forecaster at the North American Aerospace Defense Command (NORAD) Solar Forecast Center, was on duty that day. The tropospheric weather forecaster told him NORAD's command post had asked about any solar activity that might be occurring.

“I specifically recall responding with excitement, ‘Yes, half the sun has blown away,’ and then related the event details in a calmer, more quantitative way,” Snyder says.

Along with the information from the Solar Forecast Center, NORAD learned the three BMEWS sites were in sunlight and could be receiving radio emissions from the sun. These facts suggested the radars were being "jammed" by the sun, not the Soviet Union, Snyder says. As solar radio emissions waned, the jamming also waned, further suggesting the sun was to blame, he adds.

According to Snyder and the study authors, it was the military’s correct diagnosis of the solar storm that prevented the event from becoming a disaster. Ultimately, the storm led the military to recognize space weather as an operational concern and build a stronger space weather forecasting system, he says.

By posting a comment you confirm that you have read and accept our Posting Rules and Terms of Use.
Advertisement
RELATED ARTICLES
What does it take to chase tornadoes? The right car, of course.
Moonbounce turns 73
See Better Images of Sunspots During the Total Solar Eclipse
Commentary: Let's Talk About the Weather
Future of Life Institute Grants Award to Late Soviet Officer for ‘Helping Avert WWIII’
Advertisement