A Water Treatment Alternative to Chlorine?

The ongoing public water crisis in Flint, Mich., has many Americans more concerned than ever as to what their drinking water contains. But whereas lead poisoning is the primary concern in Flint, the presence of disinfection byproducts in drinking water is often a greater public health worry.

Since its introduction a century ago, chlorination has eliminated deadly waterborne diseases such as cholera and dysentery from drinking water supplies. The oxidizing characteristics that make chlorine and chloramine ideal disinfectants also cause them to react with organic matter in water and form disinfection byproducts (DBP).

There are hundreds of reported DBPs, but less than a dozen are currently regulated by the U.S. Environmental Protection Agency, according to the Water Research Foundation. Regulated byproducts include the trihalomethane (THM) and haloacetic acid (HAA) groups, as well as bromate and chlorite.

According to several published studies, long-term exposure to THMs and HAAs is known to cause various cancers in animals and humans. As such, the EPA Disinfection Byproduct Rule, Stage 1 (1998) mandates an 80-parts-per-billion (ppb) threshold for total trihalomethanes and a 60 ppb limit for the five types of HAA. Water utilities often struggle to meet these regulations, and public awareness of their harmful effects is on the rise.

Although chlorination remains the dominant water treatment method throughout the world, the risk of DBPs and consumers’ dislike of residual chlorine’s taste and odor has caused some countries and municipalities to move toward alternate disinfection methods. Switzerland and the Netherlands, among other European countries, are leading the way toward eliminating residual disinfectants in drinking water. Cycling in the Netherlands whose residents use 128 liters of water per capita per day, among the lowest usage rates in the developed world. Image source: David Wagman. The Netherlands may be the most successful to date. The country used chlorination until the mid-1970s, when a chemist monitoring the Rotterdam water supply discovered that chlorinated water produced trihalomethanes. The discovery revolutionized the country’s water treatment philosophy, leading to a reduction in chlorine. The disinfectant was last used in the Netherlands in 2005.

The joint efforts of 10 Dutch water companies, all committed to improving their water systems and pursuing joint research, is key to establishing and maintaining a chlorine-free water system. The utilities achieved their goal using a four-point approach across their systems:

Use the best sources available. The companies use, in order of preference, microbiologically safe groundwater, surface water with soil passage or bank filtration, or surface water directly treated with multiple barriers such as ultraviolet (UV) disinfection.

Use alternate disinfection methods. The Dutch treat drinking water using physical processes such as sedimentation, filtration and UV disinfection rather than chemical chlorination. If necessary, they may use ozonation or peroxide oxidation, neither of which produces a residual disinfectant that reaches a consumer’s faucet.

Prevent contamination and microbial growth during distribution. The Netherlands has replaced 100,000 km of water mains with biologically sound materials. Most piping is now made of nonplastic PVC, followed by asbestos and cast iron. The widespread use of PVC and low water pressures place Dutch leakage rates at around 3%, lower than most other European countries.

The Dutch have experienced three outbreaks, one involving E. coli and two resulting in gastroenteritis, since 1945. According to a 2009 study, 0.01% to 0.09% of Dutch water samples contained E. coli, almost identical to data from chlorinated systems in the U.K. and France. Polling has shown that over 95% of Dutch residents trust their water suppliers and approve of their drinking water’s quality and taste.

The Dutch approach to water proves that a safe, non-chlorinated water supply is possible. But a similar system might prove difficult to replicate elsewhere due to the Netherlands’ unique characteristics. The country is the most densely populated in Europe, with more than 1,000 people per square mile, according to 2016 estimates. Combined with heavy urbanization, this allows for centralized management of roadways, water systems, public transport and power systems. The Netherlands, therefore, is able to manage water supply and distribution with no more than 10 regional water companies. According to 2008 statistics, the country also uses 128 liters per capita per day, among the lowest usage rates in the developed world.

The Netherlands also benefits from naturally occurring high-quality water sources. The northern, southern and eastern parts of country derive their drinking water from sandy aquifers. This phreatic groundwater is typically microbiologically safe, so much so that chlorine has never been used in these areas. 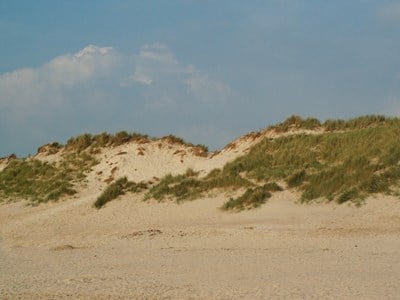 Sand dunes near Amsterdam and The Hague are used as natural filtration systems. Groundwater in western areas near Amsterdam and The Hague is brackish and generally unusable. But sand dunes in the region naturally filter surface water and reduce pathogenic parasites and bacteria. Much of the natural supply of dune-infiltrated surface water dried up after World War II, but the Dutch responded by pretreating water from the Rhine and Meuse rivers and infiltrating it into the dunes, essentially using them as sand filters.

It may be difficult for many people to imagine a disinfectant-free water supply in a large, decentralized country such as the United States. Water supplies are highly localized, with more than 50,000 service providers. With little centralized support, local practices and water quality vary widely. According to the 2013 ASCE American Infrastructure Report Card, drinking water systems are reaching the end of their practical life, so upgrading current piping remains the top priority rather than innovative investment. (For more on the state of U.S. water supply, read “Clean Water, Big Price Tag.”)

Fully abandoning chlorination probably remains unrealistic in most U.S. locations, but UV irradiation and membrane filtration techniques have emerged as frontrunners in the quest to reduce the need for potentially harmful disinfectants. Both UV and membrane processes remove bacteria and can filter chemicals with little if any residual disinfectant reaching a customer’s tap, eliminating the possibility of DBPs. Using these systems in conjunction with other barrier methods like ozonation can result in water quality comparable to that of a conventional system, but without the chlorine.

Adoption of these less commercialized methods could improve a water system’s microbiological and chemical safety, but at a potentially significant cost. UV and membrane systems are often modular and therefore do not scale well for larger plants when compared to chlorination. Both systems require greater energy investments, and membrane filtration produces potentially toxic liquid waste that may require further treatment. These expenses are sometimes not included in capital cost data.

Chlorination revolutionized drinking water safety and availability, reliably eliminating waterborne diseases that killed many people each year. The understanding and regulation of DBPs continues to evolve, and engineers must continue to weigh chlorination’s benefits against the cost of chemical residuals or alternative treatment.

By posting a comment you confirm that you have read and accept our Posting Rules and Terms of Use.
Advertisement
RELATED ARTICLES
Moisture measurement for ozone generators
Graphitic carbon nitride photocatalyst kills 99.9% of bacteria in water
A tiny ozone generator for water disinfection at home
Video: From wastewater to drinking water – and back again
Watch: Water quality sensors styled with human hair waste
Advertisement