The Race for a Reusable Rocket

Despite decades of effort, aeronautics engineers haven’t been able to apply the adage “reduce, reuse, recycle” to space-bound rockets. Some companies have managed the feat, perhaps most notably SpaceX, the Elon Musk company which has successfully landed five rockets out of eight attempts. 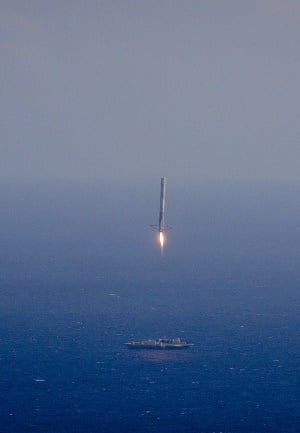 The SpaceX CRS-6 Falcon 9 lands on a drone ship in April 2015. Image source: SpaceXThe company, which has a contract with the U.S. space agency NASA to resupply the International Space Station, has already reduced the cost of sending a pound of cargo into space from $5,000 to $1,200, says William Claybaugh, CEO of the Space Transportation Institute.

SpaceX, together with Jeff Bezos’ company, Blue Origin, and others mean that reusable rockets have the potential to dramatically lower the cost of spaceflight.

In June, Blue Origin intentionally crash-landed part of its New Shepard rocket to see if the vehicle could keep people safe in the event one of its parachutes failed. The vehicle has a number of systems in place to help the vehicle land. Just prior to touchdown an engine on the bottom of the spacecraft fires against the ground to slow the vehicle. For still more cushioning, the bottom of the capsule has a a ring of eight segments made of aluminum honeycomb material. This material helps to absorb some of the capsule’s impact with the ground.

Bezos said in an email that the company received good results from the crash-landing test, indicating that any passengers onboard would have survived.

SpaceX used little new technology in building its Falcon 9 reusable rocket, “with the possible exception of probably a couple of 3D printed valves,” says Claybaugh. Instead of using revolutionary technology, SpaceX applied a private-sector mindset instead of NASA’s “let’s not worry about cost and build what we want” approach, he says.

The SpaceX model has been, first, to drive toward low cost, and, second, to achieve the highest possible performance at the lowest possible cost, he says. Using this approach, SpaceX’s engineers built a two-stage liquid oxygen (LOX) and kerosene-fueled rocket that launches payloads into geostationary transfer orbit. This type of thinking was largely unprecedented, according to Claybaugh, as other vehicles used liquid hydrogen for propellant and relied on three stages to reach orbit.

“It’s higher performing than any rocket today at a factor of four lower cost,” says Claybaugh.

Blue Origin has taken a different approach than SpaceX: its entire vehicle was designed to be reusable. “They’re starting with a clean sheet design that’s intended to be reusable from the get-go, and that’s very, very expensive upfront,” Claybaugh says. “It pushes technology near its limits.”

Whether a company plans to reuse the entire rocket or just the first rocket stage, the design considerations are the same. The rocket must be designed to start at Mach 0, obtain speeds approaching Mach 10 and then slow to Mach 0 at landing.

The decision to use a reusable or disposable rocket is left to the rocket builders, according to Phil McAlister, NASA’s director of commercial spaceflight. The space agency contracts with a company for a certain number of missions at a certain price, and the agency is satisfied if the launch vehicles meet its criteria. 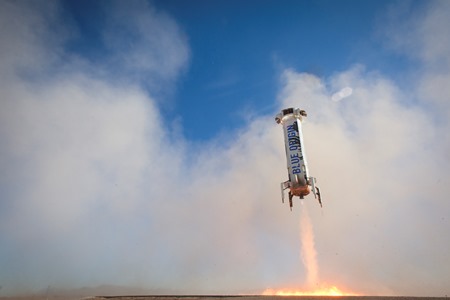 An engine on the Blue Origin booster stage fires at around 3,000 feet and helps to slow the vehicle as it returns to earth. Image source: Blue Origin. If one of NASA's partners proposes using a reusable rocket, then the rocket would need to perform adequately and meet NASA’s safety and reliability requirements. “If it does then we are perfectly fine with that, and we actually want our partners to close their business case and provide ongoing cost-effective services,” McAlister says. “So, if they can do that with a reusable rocket and bring their costs down, that’s good for NASA and it’s good for our partners.”

Despite the rush of reusable rocket offerings, it’s not clear how the marketplace will react to a new paradigm once the rockets start carrying payload. Customers tend to prefer the established method when faced with a new alternative – unless the cost is considerably less, says Claybaugh.

Currently, Blue Origin may be winning the race for reusable rockets as the company has flown its suborbital vehicle about once every six weeks, according to Claybaugh. SpaceX has yet to reuse one of the stages it has recovered.

Refurbishment costs could determine the winner of the SpaceX-Blue Origin competition, as the company that can turn around its vehicle the quickest will win the price battle. Neither company has provided detailed information on the condition of its craft upon landing.

“I know that Elon’s desire is no refurbishment costs. Bring it back, move it over to the launch pad, stick a new second stage on it, fuel it and fly it,” Claybaugh says. SpaceX intends to launch a mission with a pre-flown first stage later this year, the company says.

Landing a reusable rocket is a difficult but not insurmountable technical challenge. In 1993, NASA’s Delta Clipper Experimental rocket (DC-X) launched and landed vertically, so the know-how existed almost 25 years ago. 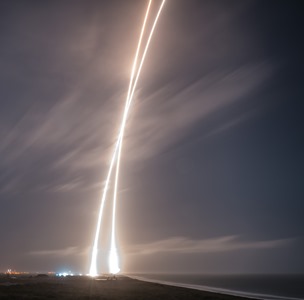 The launch and landing streaks of the SpaceX Falcon-9 vehicle in late December 2015. Image source: SpaceX. SpaceX, however, faces a unique set of challenges when trying to land its Falcon rocket. One of the difficulties was self-imposed, according to Claybaugh, as the company chose to land without having the ability to hover.

Hovering means that “throttleable” engines allow aeronautics engineers to vary the rocket’s thrust as it attempts to land. Doing so allows the craft to hover 50-100 feet above the landing site and descend for a landing. Yet even though Claybaugh says this is “far easier” than trying to land a rocket that isn’t throttleable, it’s “still tricky, in fact it’s still very tricky.”

That’s because as the vehicle gets close to landing, say within the last 10 feet, the exhaust from the rocket nozzles creates a vacuum that acts to suck the vehicle down. “And so at the last minute you have to turn up your thrust to keep from crashing,” he says.

SpaceX’s non-throttled rocket raises the level of difficulty as “they’ve got no room to maneuver. You’ve got to go in and just stick it, first thing,” says Claybaugh.

Although SpaceX will continue to make the bulk of its revenue from space-bound freight traffic for the next few years, Claybaugh says that space tourism represents the pot of gold at the end of rainbow for SpaceX and Blue Origin.

(Read “SpaceX Innovates as It Aims for Mars.”)

Two separate studies have shown that would-be space tourists are willing to spend millions of dollars to take a joy ride into Earth orbit, and would be willing to spend even more to stay the night in a “space hotel,” according to Claybaugh.

Once space travel becomes more economical, well-off travelers will be able to take a holiday in space, and likely use reusable rockets to get there.