SpaceX Innovates as It Aims for Mars 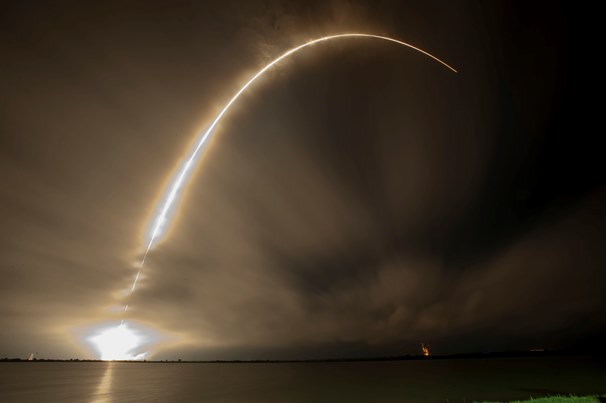 Space Exploration Technologies Corp., or SpaceX, is a space transport services company founded in 2002 by Elon Musk. Among its goals, the company hopes to reduce space transportation costs and eventually enable man to become an interplanetary species. To reach these goals, it has developed the Falcon 9 launch vehicle and is developing the Falcon Heavy, both of which are intended to become reusable.

SpaceX also has developed the Dragon spacecraft that it places into orbit using the Falcon 9. Currently the Dragon is transporting cargo into space. However, on Sept. 16, NASA selected SpaceX and Boeing to transport U.S. crews to and from the International Space Station (ISS) using their Dragon and CTS-100 spacecraft. SpaceX won a contract worth up to $2.6 billion. Boeing's contract is worth up to $4.2 billion. NASA said its goal is to end by 2017 the United States' reliance on Russia to carry crews to the ISS.

And at 1:52:03 a.m. EDT on September 21, the SpaceX Falcon 9 rocket and Dragon lifted off from the Kennedy Space Center in Florida on a resupply mission for the ISS. The launch began a two-day chase of the space station that was to end Sept. 23 when European Space Agency astronaut Alexander Gerst and NASA astronaut Reid Wiseman reach out with the station's robot arm and maneuver the Dragon capsule to latch onto a port of the station.

The current Falcon 9, known as the Falcon 9 v1.1, introduced several improvements. It is heavier at 1,115,200 pounds and taller at 224 feet, though it still measures 12 feet in diameter. The extra height and weight are due to the additional fuel required by its nine improved Merlin 1D engines that are arranged in what SpaceX calls an Octaweb configuration. In this configuration, eight of the nine engines are arranged in a circle with the ninth located in the center of the circle. SpaceX claims this configuration is more reliable, having been the preferred arrangement for NASA's Saturn I and Saturn V rockets. SpaceX claims that two of the nine engines can fail in this arrangement without endangering the overall mission.

The more powerful engines result in higher specific impulse at sea level (282 seconds) with increased payloads of 28,990 pounds to LEO and 10,690 pounds to GTO. Just like the earlier v1.0, the v1.1 is a two-stage launch vehicle. The stage separation system was redesigned for v1.1 with the number of attachment points reduced from 12 to 3. The separation system uses pneumatics instead of traditional pyrotechnics for low-shock, high reliability separation that can be tested on the ground.

The Falcon 9 v1.1 can be launched with the SpaceX Dragon capsule or a payload fairing, which is a composite structure that protects satellites during delivery to LEO, GTO or beyond. The fairing consists of an aluminum honeycomb core with carbon-fiber face sheets fabricated in two half shells. After first-stage separation and prior to second-stage cutoff, the pneumatic system along the vertical seam pushes open for satellite deployment.

The Falcon 9 v1.1 was first launched on Sept. 29, 2013 and is the only active Falcon launch vehicle at present. As of publication, there have been six successful v1.1 launches.

When Elon Musk founded SpaceX, he envisioned a tenfold reduction in launch vehicle payload costs. One way to achieve this goal was to develop reusable launch vehicles, particularly the first stage, which represents 70% of the vehicle’s cost.

SpaceX has implemented its reusable launch system development program over the past several years. This program has included development of the Grasshopper and the F9R Dev classes of test vehicles. The Grasshopper was a 106-foot-tall, single-engine (Merlin 1D) vertical takeoff and vertical landing (VTVL) vehicle that made eight successful test flights in 2012 and 2013. On its final launch, the Grasshopper reached an altitude of 2,441 feet before it descended under a controlled thrust to the launch pad with the accuracy of a helicopter.

The larger and more powerful F9R Dev test vehicle began VTVL flights in 2013. It consisted of a Falcon 9 v1.1 first stage with three engines (Merlin 1D). It made a successful VTVL test flight to an altitude of 3,281 feet. The F9R Dev was destroyed on August 20 when a blocked sensor caused the flight computer to initiate an auto-terminate procedure. Construction of a F9R Dev 2 is underway for VTVL testing.

In addition to the test vehicles, SpaceX has performed high-altitude, high-speed, controlled-descent tests of post-mission Falcon 9 v1.1 booster stages from recent Falcon 9 launches. The most recent tests confirmed likely soft landings over the Atlantic Ocean. The next step is to conduct these landings on the launch pad.

The reusable launch system development program is geared toward producing a reusable version of the Falcon v1.1, to be called the Falcon 9R. The program has produced several technological innovations including extendable carbon fiber/aluminum landing legs, improved attitude control, a restartable first-stage ignition system, throttleable rocket engines, improved navigation systems and a thermal protection system. SpaceX is expecting its first successful recovery of a Falcon 9 v1.1 first-stage booster later this year or in 2015. Eventually, the second stage booster is also expected to be recovered.

Once operational, the Falcon 9R is expected to reduce the costs of payloads to LEO and GTO. SpaceX is also working on a larger launch vehicle, the Falcon Heavy, that will have about four times the payload capacity to LEO than the Falcon 9 v1.1. This launch vehicle will be one of the most powerful launch vehicles since the Saturn V. The first launch is scheduled for some time in 2015 and SpaceX also plans to make this vehicle reusable.

By posting a comment you confirm that you have read and accept our Posting Rules and Terms of Use.
Advertisement
RELATED ARTICLES
NASA Approves SpaceX Vehicle
Block 5: How SpaceX Re-Engineered its Falcon 9 Rocket to Endure a 100-Launch Lifespan
SpaceX Launch Vehicle Lands Vertically as Planned
Inaugural Launch of SpaceX’s Falcon Heavy Will Fling a Sports Car Past Mars
Four Aerospace Developments to Look for in 2018
Advertisement