Preparing for the Era of Smart Manufacturing

The global manufacturing industry is on the verge of what many are calling its fourth Industrial Revolution.

These automated facilities will be more efficient and flexible than current iterations and will allow companies to provide more individualized and customizable goods. However, Industry 4.0 faces significant challenges before it can meet all of its expectations.

To understand the coming wave of manufacturing innovation, it is helpful to consider operational examples. MIT’s Technology Review trod the hallways of one of Audi’s German plants for a glimpse of the future of industrial automation. Most of the devices used in this particular plant are pre-programmed to run without intervention. Audi’s factory uses devices such as optical sensor-guided lasers and regenerative braking (the practice of, say, turning an electric motor into a generator by storing and reusing kinetic energy released from brake friction) to guide their cars’ assembly. The plant’s door-assembly process uses a series of automated robotic tools (sensors, arms and lifts) that can switch between three different car models.

Elena Messina, group leader of the Manipulation & Mobility Systems Group of the Intelligent Systems Division at the National Institute of Standards and Technology (NIST), notes the importance of advances in robotics in factories like Audi’s by saying, “Currently, a lot of time and resources are spent designing custom end effectors for robots to grasp specific parts.” Tools must be changed, which requires additional time and equipment. She says the goal is to have more general purpose “hands” that can handle a broader spectrum of parts and accommodate variations in material properties, size, location or orientation. “For really effective handling, embedded sensing is important,” Messina says. 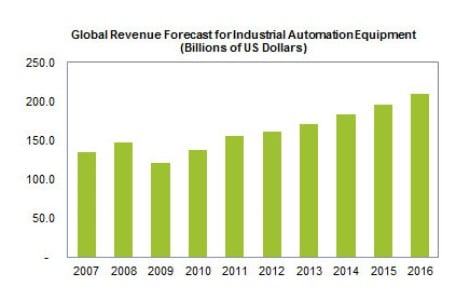 Smart factory solutions generally take the form of entire systems that feature extreme adaptability and efficiency. The most effective solutions will need to pull together the cyber and the physical worlds in the manufacturing environment using the Internet of Things.

(Read "The Internet of Things in the Real World, Part 4" by clicking here.)

General Electric’s use of sensors offers a related example of a smart factory solution. As explained in an article at the GE Software website, thousands of sensors in GE’s plants collect data during the manufacturing process. If the outcome of production changes, sensors alert workers who then examine the results and address the problem. GE’s sensors can also allow machines to adjust – without human intervention – when, for example, a certain type of material that is more fragile enters the assembly line.

According to Messina, pervasive sensing (such as GE’s) is key. “The sensing modalities extend beyond vision and thermal/vibration, but also include 3D sensing for identifying and localizing parts or humans/other objects in the environment or for inspection,” she says.

Manufacturers will now be connected with logistics providers and other factories in similar industries, via the Internet of Things. However, as Messina suggests, doing so effectively will require integration and interoperability standards “to make it easier to plug new equipment together and to transmit information about new products and even processes all the way down the supply chain into the shop floor and work cells.”

The factories and assembly line components will utilize big data – such as the data collected by GE sensors – to turn manufacturing plants into automated facilities. Smart factories collect and analyze big data to improve the design, optimization, control and operation of the manufacturing process. The solutions will use automated systems to perform manufacturing tasks better, more efficiently and with lower costs. Yet big data – a cog in the smart factory machine – is also a major concern.

To be sure, manufacturers have used data for a while now, just not necessarily in the quantities they see today, or from devices connected to the Internet of Things. The data can be a lot to handle, especially if it requires improved or additional infrastructure – usually in the form of software systems or data analysts. Mark Watson, associate director of Industrial Automation at IHS, says that manufacturers will need to develop “software and analytical systems that turn the deluge of data produced by intelligent factories into useful and valuable information.”

Bill Ruh, vice president of GE Global Software, says the rapid growth of big data is “outpacing the ability of current tools to take full advantage of it.” He says that while predictive analytics (widely used in GE’s plants) will create productivity gains, talent (such as data scientists) will also be needed to interpret and extract value from data. 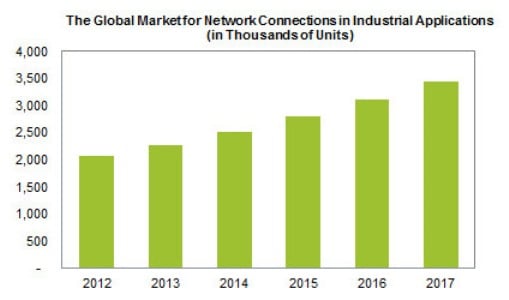 IHS predicts the number of network connections in global factories will rise from 2.1 million in 2012 to 3.4 million by 2017. Source: IHSBig data also represents potential security concerns. Given widespread reports of hacking and data breaches around the world, manufacturers need to consider how confidential all of their transmitted data is. According to Ruh, protecting sensor networks and critical infrastructure will be crucial for the reliability and safety of industrial operations, particularly as more machines and systems are brought online.

Concerns with big data are intertwined with another concern manufacturers may have with increased automation. Audi, for example, works with a robotics manufacturer who, in turn, works with a group of more than 60 research institutes that study advances in manufacturing. As companies move forward with smart factories, they must forge partnerships with robotics manufacturers, software systems providers, research institutes and so on. Not only might the generation of these partnerships prove labor-intensive, but companies also will need to ensure their data is safely transmitted between their partners.

Manufacturers must also develop a level of trust with their data scientists and analysts, as well as their partners, an oddly human component in the automation movement. That human bridge is another obstacle in the way of smart factories. As a recent trade press article explains, large manufacturers are by nature slow movers. They may be reluctant to rapidly implement entire systems, especially with security risks on the table, not to mention their need to rely on outside partners to provide critical technology solutions.

Additionally, manufacturers will need to meet the increasing demand for personalized products. The electronics and automotive industries are among the early adopters according to IHS’s Watson. To mass produce individualized products is time consuming and wasteful for manufacturers whose primary value proposition is speed. Using wireless technology to turn their factory floors into automated, process-based systems will help ensure they can accommodate the changing marketplace. Bluetooth, big data, sensors and emerging 3D printing technology are just some of the tools manufacturers can use, but they must overcome their reluctance to implement the tools first.

Despite the urgency among many to adopt Industry 4.0, widespread implementation will likely take time. As Charlie Gifford, PMP, general manager and senior advanced manufacturing consultant at Intelligent Manufacturing Institute, 21st Century Manufacturing Solutions, says, “There is an industrial revolution starting but it is still a 25-year evolution.” He says the evolution will include significant R&D, scaling, business cases, risk management/benefit analysis and skills gaps to be addressed and with large amounts of capital that are not yet committed. He says that the skills gap will take years to resolve and that “today’s skill sets are too specialized” among professionals in the IT, lean manufacturing and process engineering fields. “All must be combined into a single team,” Gifford says.

While challenges remain, the benefits of Industry 4.0 seem clear. The ultimate goal of smart manufacturing is to interconnect every step of the manufacturing process. Information regarding the construction of products will pass seamlessly from one partner factory to the next.

This interconnectivity will allow factories to predict defects, address personalized requests and fix problems along the assembly line without efficiency-hampering human intervention. Companies that join the new era of manufacturing may well reap big rewards in the coming decades.

By posting a comment you confirm that you have read and accept our Posting Rules and Terms of Use.
Advertisement
RELATED ARTICLES
Industry 4.0: Intelligent Manufacturing and Process Control
New Standard Aims to Foster Smarter Factories
Remote monitoring for facilities
6 recent trends in mechanical motion control
4 Signs Industry 4.0 Has Arrived
Advertisement