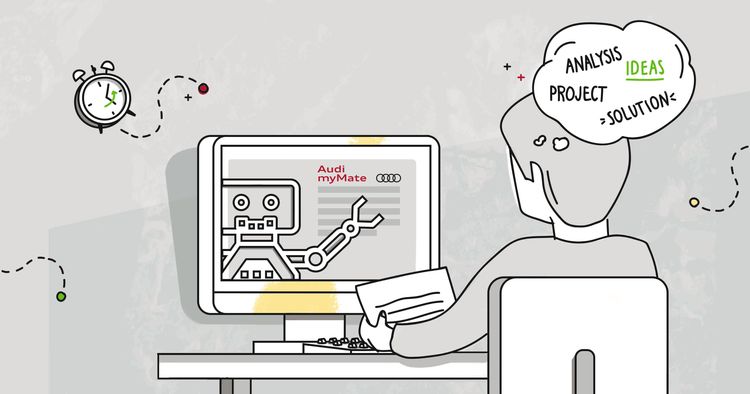 Source: AudiAuto manufacturing giant Audi has introduced a robotic digital assistant to its office workers to help alleviate the monotony of their jobs.

Based on Audi’s robotic process automation (RPA) platform, which was introduced earlier this year, the robotic digital assistant operates based on “if-then” rules to take on tiresome office tasks. Because the tasks are often repetitive, humans tend to grow tired mid task, making the work error prone. However, Audi myMate never tires, according to Audi. In lieu of this repetitive work, employees are instead able to take on more interesting and challenging tasks.

Already currently in use in Audi’s asset accounting department, entering capital goods and thus freeing up humans in that department to analyze data, Audi myMate is expected to be deployed to other departments within the company. By 2020, the company intends to equip Audi myMate digital assistants with artificial intelligence.

No stranger to robots in the workplace, Audi has used robots almost exclusively on the factory floor, welding together and assembling automotive parts. However, in the office, Audi myMate is expected to digitize office work.

By posting a comment you confirm that you have read and accept our Posting Rules and Terms of Use.
Advertisement
RELATED ARTICLES
Technology Displays Traffic Light Change Clock
Preparing for the Era of Smart Manufacturing
Audi Plans Tablet-Sized Controller for Autonomous Vehicles
Robotic system could expedite building construction
Eight industries that will need to adapt to automation
Advertisement