Virtual Reality Is Central to Aerospace and Maritime Training 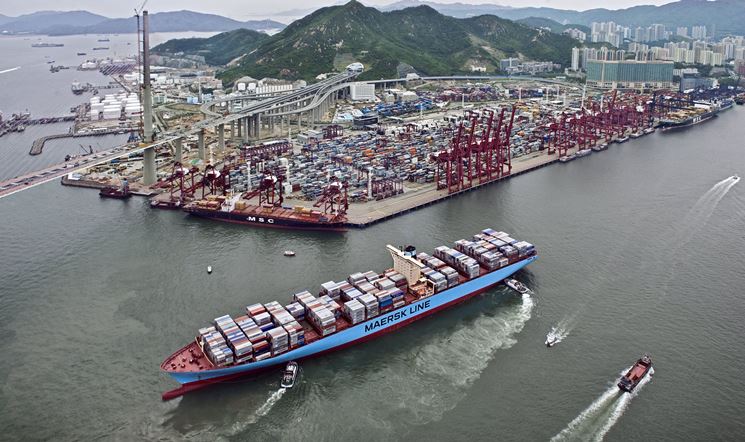 Simulators are used to train everyone from bridge personnel to dock workers.

Virtual reality is increasingly making the headlines, thanks mainly to the gaming community and the success of Pokemon Go, but VR began finding its way in a wide range of domains a long time ago.

Virtual reality has been around for decades, one of its earlier applications being the training of aircraft pilots in rather basic mechanical installations. It is now widely used in the aviation and maritime sectors to form crews. Many of the systems set up in the complex training installations in use today rely on a number of IEC International Standards for their operations.

The perception of three-dimensional depth of space to create a form of virtual reality has been familiar for a long time. It was used widely between the two World Wars and later in toys and devices such as projectors and stereoscopes. The intent was to give viewers looking at two photos taken from different angles the impression of seeing a scene or a landscape in three dimensions.

Beyond the visual dimension, what could arguably be described as the first "serious" virtual reality application was developed in the form of flight simulators to train pilots. 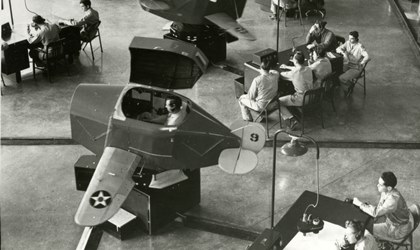 After a spate of air crashes by pilots not familiar with instrument flying, the U.S. Army Air Corps initially bought six Link Trainers, which were designed to train crews to fly by instruments only. During World War II, some 500,000 U.S. and allied pilots were trained on the ground in the basic skills of flying by using more than 10,000 Link Trainers. The trainers became known as Blue Boxes, and were improved by using films and interactive controls to create virtual flying conditions.

The first generation of flight simulators relied primarily on mechanical systems to give trainee pilots basic physical feedback from their actions through pitch and roll. A greater sense of reality was provided by the introduction of electronic systems in simulators to reproduce instrument panels' visual indications as well as sounds and motion.

In 1954, U.S.-based United Airlines bought four flight simulators at a cost of $3 million. These machines, to which the nose of a real plane with all flight instruments was attached, are considered one of the first modern flight simulators for commercial aviation, although they were not installed on moving platforms.

Flight simulators have improved greatly over the years and are now highly complex.

The International Civil Aviation Organization (ICAO), the United Nations specialized agency that codifies and regulates many aspects of civil aviation, published a Manual of Criteria for the Qualification of Flight Simulation Training Devices (ICAO 9625-1 4th edition, 2015).

Simulation also may prove useful in the not-too-distant future as the introduction of remotely-controlled unmanned ships is advanced.These devices can be costly, depending on their characteristics and certification class from various aviation authorities. Flight training devices (FTDs), also known as fixed base simulators, can cost from a few hundred thousand dollars to a few million; full flight simulators (FFSs), or motion base simulators, cost anything from a few million dollars to dozens of millions.

British Airways is reported to have spent GBP 10 million ($14 million) on its newest simulator to train the pilots who will fly its Airbus A380 superjumbo aircraft. This may seem expensive, but when the cost of flying an airliner (fuel, maintenance and crew) is taken into account (from $6,000 an hour for single-aisle airliners to up to $8,000 for wide-body jets) flight simulators are a cost-effective way of training crews.

Flight simulators rely nearly entirely on electrical and electronic systems for their operation.

One manufacturer, Axis, stresses that its FFS has a "6 DOF (degree of freedom) fully electric motion system without any other pneumatic or hydraulic support systems, with less maintenance than any other system in the industry." IEC TC 2: Rotating machinery, develops International Standards for electric motors.

From Aviation to Shipping

Simulators are not only used to train aviation pilots, but also – and increasingly – are used in the shipping industry to train bridge officers, pilots, mechanics and other operatives.

Training for the latter sector relies heavily on computer-based virtual reality systems and simulation suites that reproduce locations and ask for reactions to commands from the bridge, as well as to emergency situations, such as simulated fires or collisions and to mechanical incidents. Simulators are also used to train harbor crane operators for loading and unloading containers and to train other shore workers.

The equivalent level of equipment to the multimillion FFSs required in training aviation pilots is not always needed in the maritime sector, making it possible to have training facilities installed in educational settings or on-shore sites.

The International Maritime Organization (IMO), the UN agency with responsibility for the safety and security of shipping and the prevention of marine pollution by ships, supports training using simulation and manned models of ships. IMO Resolution A.960(23) states that "The training should include practical experience gained under the close supervision of experienced pilots. This practical experience gained on vessels under actual piloting conditions may be supplemented by simulation, both computer and manned model, classroom instruction, or other training methods."

Advanced practical training of engine room and ship-bridge crews and of pilots is carried out on simulators in special schools and in centers run by marine equipment manufacturers such as Kongsberg Maritime AS and Transas Marine International, or by professional associations like the French Pilots’ Syndicate for the Atlantic, Brittany and Overseas Simulator (SPSA).

SPSA offers an interesting insight into the technical set up of its simulator which relies on computers and offers an impressive display system.

Screen projection is the key element of the simulation process. Through the bridge portholes, the image is displayed by 13 beamers on a 280° panoramic screen, 18 ft high x 52.5 ft diameter [5.5 m x 16 m]. In addition, two short focal projectors display the rear view from the pilot house. Finally, four 3.3 ft [1 m] LCD screens have been placed on both sides of the bridge wings in order to optimize the simulation of berthing and departure operations.

In addition the installation has a navigation bridge installed just above the projectors and its dimensions are those of a medium-sized vessel bridge. It is equipped with navigational aids and enables the monitoring of all kinds of vessels.

Although the system has no moving parts, it is so realistic that some users feel seasick, says SPSA Director Vincent Le Gall.

Other centers make it possible for trainee pilots to get practical experience by steering electrically-powered model ships in a basin. One such facility in France, Port Revel, has a fleet of 11 1:25 scale ships. These represent 20 vessels and five radio-controlled tugs, which can sail on a 5 hectare [12 acre] stretch of water.

The ships are fitted out with conventional features typically found onboard a real ship and have built-in software and adjustable engines that can reproduce diesel or turbine propulsion.

Simulation is also used to train maritime search and rescue and lifeboat crews, and for port operations.

Simulation also may prove useful in the not-too-distant future as the introduction of remotely-controlled unmanned ships is advanced. Steering these vessels from a distance will require skills honed in simulators and technologies applied in VR applications and installations.

No Standards, No Simulation

An important part of all simulator systems used to train pilots or ships crews is played by the components that give trainees a sense of reality and sensorial, even physical, feedback, a kind of high-end virtual reality through animation and sounds, in addition to systems that reproduce motion.

IEC TC 100: Audio, video and multimedia systems and equipment, and its technical areas (TAs) develop international standards for a wide range of equipment such as projection, storage and sound systems destined to transmit images and sounds to displays or speakers.

Overall simulation systems for training civilian and armed services professionals in aviation, maritime and related shore operations rest on international standards developed by many IEC TCs and SCs, working with specialized agencies like IMO or ICAO, the industry and other standards developing organizations.

By posting a comment you confirm that you have read and accept our Posting Rules and Terms of Use.
Advertisement
RELATED ARTICLES
Commercial Remote-Controlled Ship Predicted by End of Decade
ONR employs AR/VR training systems to support infantry
Digital Simulator Digs Up a Realistic Experience
Flying car hub to launch in 2025 in central Florida
Simulation and design optimization of an electric delivery truck
Advertisement