Flaps, slats and spoilers have been used on aircraft for decades to modify flight qualities like lift and drag during various maneuvers such as takeoff and landing. But those flight surfaces are separate components of the wing and introduce gaps in the smooth flow of air over a wing, creating inefficiencies. A wing that presents a single continuous surface to airflow while retaining the ability to adjust its shape has the potential to offer significant aerodynamic efficiencies that would lead to both fuel savings and noise reduction.

The gaps that appear when traditional flaps are deployed exist by design, functioning to re-energize the flow so that it remains attached during high-flap deflections, says IHS Principal Transonics Engineer Kevin Hackett.

“For a compliant deformable trailing edge with no gap, it is going to be much more difficult for the airflow to remain attached when deflected down," he says. "It is most likely to separate at modest angles of deflection and therefore produce less of an increase in lift. This would result in an increase in take-off run and higher approach speeds.” Hackett says that adding such technology to a wing would necessitate including some form of flow control device to manipulate the boundary layer to maintain attached flow at higher trailing edge angles.

Boeing asserts that fuel costs are the largest contributor to cash airplane-related operating costs, representing up to 60% of the total. Moreover, the Research and Innovative Technology Administration’s Bureau of Transportation Statistics reports that the total fuel cost for U.S. airline carriers for 2013 was $50.7 billion. Considering the mechanics of aircraft in cruise flight, thrust balances drag exactly. Thus, for every 1% reduction in drag, up to $500 million could be saved annually in domestic airline fuel costs.

Wings with the ability to change shape have the potential to reduce many of these sources of drag. For instance, optimizing the lift distribution along the span of the wing closer to that of an elliptical distribution can reduce the induced drag. In addition, adjusting the wing shape to promote laminar 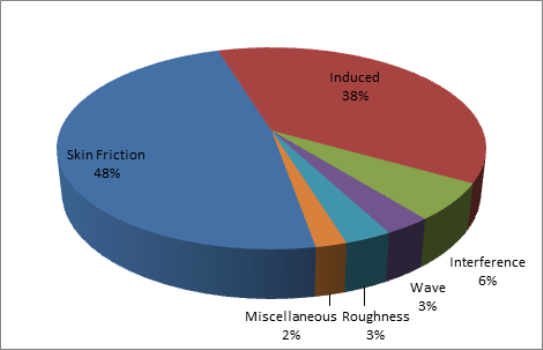 Major contributors to drag for a large subsonic transport aircraft, Source: NATO AGARDflow and delay the onset of a turbulent boundary layer over a greater range of flight operating conditions would reduce skin friction drag. An increase in wing camber caused by deflecting the trailing edge down leads to an increase in pressure drag, requiring a wing design to reduce other drag components by an amount greater than the pressure drag before a benefit is realized.

“Wing morphing has the potential to allow current wing design constraints to be relaxed, therefore allowing aspects of the wing planform to change in a way to produce a benefit relative to a wing design with these constraints,” says. Hackett.

A classic 1990 study by Airbus (“The Development and Design Integration of a Variable Camber Wing for Long/Medium Range Aircraft” published in Aeronautical Journal) indicated that fuel use could be reduced by up to 6% for transport aircraft by using variable geometry wing trailing edges. The aerodynamic lift versus drag curves comparing variable versus fixed geometry trailing edges showed significant improvement. An increased lift-to-drag ratio is favorable because it means that the wing is producing more lift or less drag.

The SARISTU (Smart Intelligent Aircraft Structures) project has received funding from the European Union’s Seventh Framework Programme for research, technological development and demonstration. The project’s goal is to reduce the cost of air travel through a number of technological solutions, including morphing of aerodynamic surfaces. The project is investigating shape change for both the leading edge and trailing edge of a wing.

One of the studies being undertaken as part of SARISTU is led by the German Aerospace Center (DLR). The project, labeled “Enhanced adaptive droop nose for a morphing wing,” involves research into a smart wing leading edge that has morphing capability, but that also provides the necessary functions of lightning, bird strike, and surface protection as well as resistance to fatigue and deicing. Leading edge morphing has the potential to enable a laminar flow wing because it presents a continuous surface that lacks discontinuities like steps or gaps that could contribute to a transition to a turbulent boundary layer. The project’s goal includes creating a large-scale leading edge design capable of integration with a full wing, to be validated by wind tunnel and structural testing. 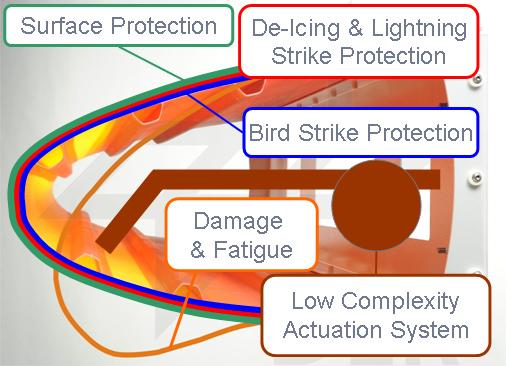 German Aerospace Center study, &ldquo;Enhanced adaptive droop nose for a morphing wing.&rdquo; Source: SARISTU
The Italian Aerospace Research Centre (CIRA) is heading up another study for SARISTU called “Structural Tailoring of Wing Trailing Edge Device.” This study focuses on a multi-rib morphing trailing edge design. Each rib is connected to a load-bearing actuator to effect changes to wing camber and sweep. The idea is to have a continually adjustable trailing edge that can pursue an optimal wing shape for maximum lift and minimum drag throughout a flight.

The European Aeronautic Defence and Space Company (EADS) Innovation Works is directing the SARISTU investigation titled “Wingtip Active Trailing-Edge.” This study is also looking to optimize trailing edge performance through shape changing, in this case on winglets. Winglets, the vertically bent structures at the ends of wings, can improve aerodynamic efficiency by reducing the drag induced by lift caused by wingtip vortices. The drawback is that winglets impart additional load onto the wing which requires extra structural support, adding to total aircraft weight. By developing a morphing winglet trailing-edge, the study hopes to demonstrate that loads can be reduced at important flight conditions, resulting in less required structural weight.

The SARISTU project is also conducting research into integrated sensor technology to reduce aircraft inspection costs, as well as improving material strength by introducing carbon nanotubes, leading to lower aircraft weight. With the laminar morphing wing concept, the project hopes to achieve an aerodynamic drag reduction of 6% and a decrease of up to 6 dB(A) in noise generated by the airframe, and is expected to be completed by August 2015. IHS Transonics Engineer Kevin Hackett says that 6% drag reduction is an aggressive target.

Italian Aerospace Research Centre study, &ldquo;Structural Tailoring of Wing Trailing Edge Device.&rdquo; Source: SARISTU“The only way this concept can possibly result in a significant gain of several percent is if it is used to relax some of the current constraints by using wing loading control to enable span increase without increases in weight. To enable this technology would require an extensive validation program to verify reliability, aeroelastics, flutter and handling.”

In the United States, NASA’s ERA (Environmentally Responsible Aviation) project is also looking into shape changing wings with its “Adaptive Compliant Trailing Edge” experiment. This study is a joint effort with the U.S. Air Force Research Laboratory. The ACTE project will replace the flaps on a Gulfstream III business jet with a flexible structure developed by FlexSys Inc. (pictured on the front page). The modified wing will have no gaps between the control surface and the rest of the wing, cutting the airframe noise generated by turbulent airflow around traditional flaps. The ERA project will conclude in 2015.

These projects are working to overcome the technological challenges presented by a shape changing wing. Innovative materials with high strength, flexibility and durability, as well as lightweight solutions for actuation are needed to realize the goal of improved aircraft operating performance. 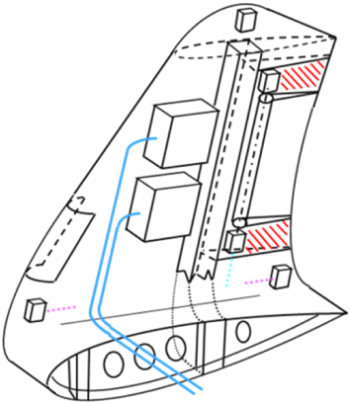 European Aeronautic Defence and Space Co. Innovation Works study, &ldquo;Wingtip Active Trailing-Edge.&rdquo; Source: SARISTUMorphing wing technology will need to mature before it can be introduced to civil aircraft. Hackett says that unmanned aerial vehicles (UAVs) offer a good platform to develop and test the technology “particularly for surveillance applications where the camber is reduced to enable the UAV to transit at high speed followed by an increase in camber when the aircraft is on station so that it can loiter at a much lower speed and maintain a good lift-to-drag ratio to maximize endurance.”

Morphing also could be applied to helicopter blades "where the camber can be varied between the retreating and advancing blade. This again would help to mature the technology as the system would be required to respond rapidly and with a very high number of cycles.”

Although the obstacles are non-trivial, the potential benefits, both economic and environmental, will continue to motivate the quest for ever greater efficiencies in aircraft engineering.