Wind turbine design is for the birds 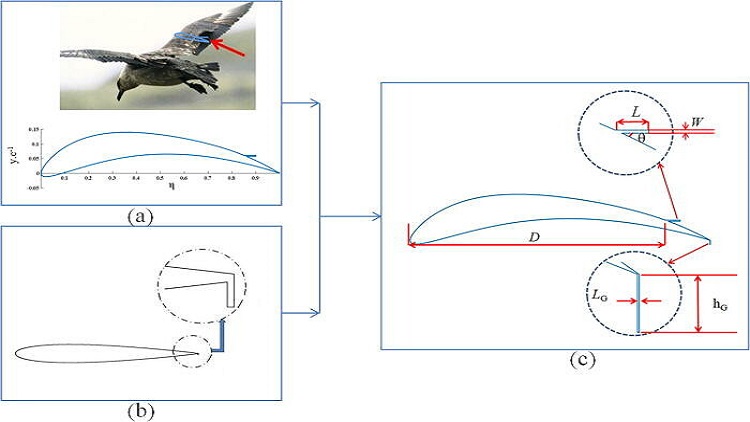 A bionic approach to improving the aerodynamic performance of wind turbine blades has been advanced by researchers from Xi'an Jiaotong University, China. The bionic airfoil design combines features of a seagull wing with a Gurney flap to enhance static and dynamic flow control.

An engineered flow control accessory, a movable Gurney flap affixed to the trailing edge of an aircraft wing or turbine blade increases energy harvesting efficiency, particularly at low angles of attack. However, a drag penalty at higher angles reduces efficiency and turbine speed. This is where the contributions from seagull wings improve airfoil aerodynamics.

Researchers have observed that feathers on the top of a bird’s wings will pop out, creating a natural flap when landing or in a gust of wind. Bionic feather-inspired flaps can increase lift and delay the onset of stalling at high angles of attack but can also reduce lift, particularly before a stall sets in. Simulations were conducted to determine the optimal combination of Gurney flaps with bionic features to realize the benefits of both approaches, and findings were compared with experimental results for an aircraft wing undergoing a dynamic stall.

Application of the flow control structure to the bionic seagull airfoil was shown to increase static lift coefficient by 15% of the airfoil, especially in the angle of attack range of 16° to 24°.

A paper on this avian-inspired advance is published in the Journal of Renewable and Sustainable Energy.

Re: Wind turbine design is for the birds
#1

There is a lot to learn from Mother Nature because she has had a LOT of time to iterate her designs.