Researchers from the German Aerospace Center (DLR) are developing a morphing wing trailing edge that can smoothly transform into any shape. 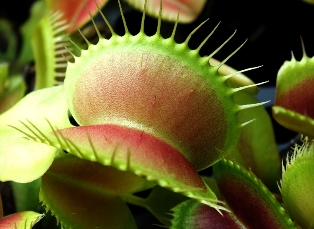 Aircraft design is borrowing ideas from the plant kingdom.The DLR researchers say this new technology is flexible, and that its movement being based on that of carnivorous plants—especially the Venus Fly Trap—enables the gap between the wing and the flap to be eliminated.

“The carnivorous Dionaea Muscipula needs to be able to close its trapping leaves very quickly to catch its flying insect prey,” says Benjamin Gramüller from the DLR Institute of Composite Structures and Adaptive Systems. “It does this by changing the pressure in the leaf cells and using a leaf-shape geometry optimized through evolution.”

The researchers have translated the cell system’s method of using pressure to develop a “flap demonstrator,” which is operated with compressed air and can flexibly assume aerodynamic shapes for cruising or landing.

The plastic cells in the demonstrator have different sizes to form the appropriate shape for the trailing edge of the wing. Two layers of cells lay one on top of the other.