SuitX, a spinoff company from the University of California Berkeley's robotics lab, has unveiled an exoskeleton that allows those paralyzed from the waist down to walk up to 1.1 miles an hour by pushing buttons integrated into a pair of crutches. The Phoenix has two motors at the hips and electrically controlled tension settings that tighten when the wearer is standing and swing freely when they are walking. 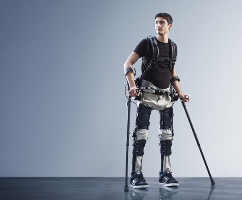 The Phoenix is among the lightest exoskeletons on the market. Image credit: SuitX.“We can’t fix their injury. But what [we can] do is postpone the secondary injuries due to sitting. It gives a better quality of life," says Homayoon Kazerooni, SuitX founder and CEO.

Kazarooni and his team have developed a number of exoskeletons over the years. Their work in the field began in 2000 with a project funded by the U.S. Defense Advanced Research Projects Agency (DARPA) to create a device, now called the Berkeley Lower Extremity Exoskeleton, that could help people carry heavier loads for longer. At the time, Kazerooni realized the potential use for exoskeletons in the medical field, particularly as an alternative to wheelchairs.

In 2011, they built the exoskeleton that helped Berkeley senior Austin Whitney, paralyzed from the waist down in a 2007 car accident, walk across the graduation stage to receive his diploma. Soon after, the Austin Project was created in honor of Whitney, with the goal of finding new technologies to create reliable, inexpensive exoskeleton systems for everyday personal use.

Today, the Phoenix is among the lightest exoskeletons on the market, the research team says. It can be adjusted to fit varied weights, heights and leg sizes and can be used for a range of mobility hindrances. At a price of $40,000, it is around half the cost of other exoskeletons that help restore mobility.