A New Face for Robotics

Instead of massive robots like those traditionally tethered to automotive welding and assembly lines, Rethink Robotics is creating a breed of smaller, more flexible and user-friendly models aimed at a wide range of light-duty applications.

Rethink introduced an industrial robot, named Baxter, in 2012, intending it to be the robotic analogue of the early personal computer. Jim Lawton, Rethink Robotics’ chief marketing officer, spoke with Engineering360 editorial contributor Larry Maloney and discussed the potential impact of this robotic evolution. Lawton has led innovation and growth at companies ranging from startup technology ventures to Fortune 500 corporations. He holds a Bachelor of Science degree in electrical engineering from Tufts University, a Master of Science degree in electrical engineering from MIT and a Master of Business Administration degree from MIT’s Sloan School of Management.

Maloney: How would you assess industry’s level of interest in adopting robotics?

Lawton: From a manufacturing perspective, it’s probably higher now than at any point in the last 20 or 30 years. There was a big push in the early ‘80s, when Japanese manufacturers figured out how to build affordable, high-quality cars and U.S. companies found that they had to automate in a hurry to catch up. But that interest eventually played out as companies completed their robot deployments.

Over the last couple years, manufacturers that had pursued a competitive strategy of offshoring to take advantage of lower labor costs are finding that this approach also has run its course. Labor rates in more and more countries have risen substantially. In China, labor rates are going up 15-20% per year. Recruiting and training costs are also rising with employee turnover.

In addition, from a logistics standpoint, being dependent on offshore labor can restrict a company’s ability to change quickly in response to market needs. And from a quality standpoint, it can take months to recover from a run of inferior parts or products shipped from overseas plants. All these factors have combined to revive interest in backing away from offshoring and adopting robotics and automation to keep costs in check, ensure quality and be more flexible in the marketplace.

Lawton: Too much automation, including robotics, is expensive, fixed and inflexible. It is good at volume production of a limited number of items, but it can’t meet the demands of companies that need to shift production rapidly or produce an increasing variety of items to satisfy changing customer tastes. 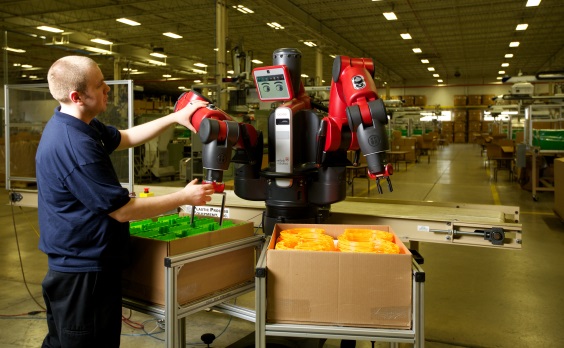 Rethink Robotics targets repetitive tasks that bore humans. Source: Rethink Robotics
Traditional robots also require sophisticated programming to perform precise operations, and they can be dangerous, as evidenced by the protective enclosures that separate these robots from workers. That means added factory floor space, which is costly. Strategies like lean manufacturing are built around the concept of continuous improvement, but how can you change when your operation is locked into a factory setup built around a very expensive installation of robots locked in cages?

Maloney: What is Rethink Robotics doing to offer an alternative?

Lawton: First of all, we wanted to design a robot that interacts with humans, rather than one set apart in a cage. The robot had to be much less expensive, so that it could be deployed in places where robots weren’t seen before. And we wanted a robot that didn’t require extensive programming.
Maloney: How does your robot embody those objectives?

Lawton: Our initial robot, Baxter, began selling in early 2013 and costs about $25,000. The typical implementation, including grippers, software and other add-ons, costs about $30,000.

Perhaps the biggest technical distinction in Baxter is that it is a force-control robot, not a position-control robot. Each of its two arms features 7 degrees of freedom, and positioned in its joints are series elastic actuators, which were invented by Matt Williamson, our director of Technology Development. The actuators contain force sensors, which enable the robot to very accurately determine the forces being applied to perform a specific task, such as picking up a finished part from a line and placing it in a packing box. Force control allows the robot to perform tasks much like humans do and to accommodate changes it encounters in the work environment.

When the technician wants to teach Baxter how to perform a task, he puts the robot into “zero-g” mode, which allows him to move the robot’s arm very freely along the desired work path. The technician activates the gripper with buttons on the robot’s wrist area. Once the technician has shown Baxter the task, it will perform it over and over again. You never have to create any code.

Baxter also includes a face screen, which serves as a feedback mechanism for technicians who are training the robot. The screen shows progress steps in a robot training session, as well as visuals of objects involved in the task. Once the actual work operation begins, the eyes on the robot’s face screen reveal various expressions, based on how well the task is being performed. For example, if the robot is having trouble picking up a part, the robot will stop, and the eyes will look confused.

Maloney: How important is system software to Baxter’s performance?

Lawton: It is extremely important, both from a usability standpoint and as a driver for the robot’s performance. Much like the iPhone, where many of the interesting capabilities come from the apps and the iOS (internetworking operating system), our robot’s software is what really makes the difference. In the last year, we’ve made changes in the software that makes the robot twice as fast and two times more precise with virtually no change in the hardware.

Maloney: What are some typical applications?

Lawton: We’ve targeted applications that are repetitive and boring for humans, as well as tasks that are dirty or dangerous. For example, at the end of an injection molding line, Baxter can pick up a completed part and insert it into a box or grid. Or Baxter can take a part and move it from one line to the next. Many applications fall into this machine-tending category. In warehousing, Baxter can do order fulfillment, picking items off a shelf for shipment.

Baxter weighs 305 lbs. fully assembled, so you won’t see it picking up heavy car panels. Still, the opportunities for light-duty robots are tremendous, since 80% of the objects that workers handle weigh less than 5 pounds.

Lawton: We'll be looking at various permutations of our Baxter design: different kinds of grippers and arms, faster speeds, more precision, software advances and, ultimately, artificial intelligence that will enable robotic learning. There is also an interesting intersection developing among such technologies as robotics, 3D printing and the growth of Big Data and analytics.

Looked at from one perspective, the robot is a big box of sensors that generates a tremendous amount of telemetry data. Companies can use that data, when combined with other data and analytics, to improve their products and processes and to increase customer satisfaction. So these robots are not just hardware platforms, but software and data platforms that open up all sorts of possibilities for our customers and their party developers.

Industry Outlook from the International Federation of Robotics

IHS Research: Rise of the Machines: Industrial Machinery Market Growth to Double in 2014

IHS Research: Chinese Market for Industrial Robots to Grow at 10 Percent CAGR to $1.3 Billion in 2017

By posting a comment you confirm that you have read and accept our Posting Rules and Terms of Use.
Advertisement
RELATED ARTICLES
Introducing Robot De Niro, a Robotic Caregiving Assistant
Technical Advances Help to Boost Robotics
Robots for Humans: Addressing the Engineering Challenges
What Is the Real Cost of an Industrial Robot Arm?
Collaborative Robots Play Nice on the Plant Floor
Advertisement