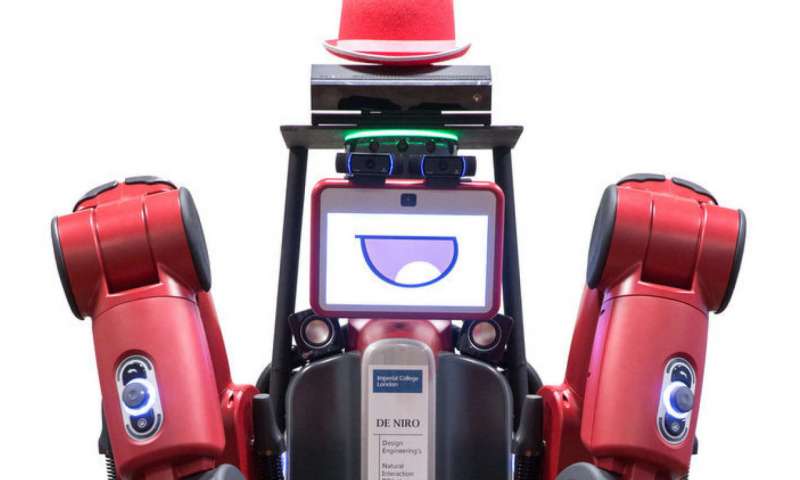 "The objectives of our project were surprisingly simple: to build something that could demonstrate social utility and contribute to Dr. Kormushev's Robot Intelligence Lab," said Fabian Falck, one of the researchers who developed Robot De Niro. "We had a handful of grand ideas, but in the end, decided to teach a robot to play fetch. We considered object retrieval to be incredibly valuable and applicable to many situations, for instance fetching medicine for frail patients who struggle to move. Our project also equipped DE NIRO with capabilities such as navigation, face recognition and object manipulation."

According to Falck, Robot De Niro is capable of completing advanced and complex manipulation tasks and can also interact with humans.

"Robot DE NIRO combines Rethink Robotics' Baxter robot with a wheeled mobile platform that makes it capable of moving around," Falck explained. "In addition, DE NIRO was enhanced by a variety of sensors such as a Microsoft Kinect and laser scanners that make it capable of perceiving its surroundings."

Setting Robot De Niro apart from other robots are its safety features as the bot is designed to interact with elderly and vulnerable people.

Falck said, "For instance, passive compliance in the robot's arms absorbs physical impact with a person. When developing its software, we placed particular emphasis on collision avoidance during manipulation and navigation of the robot, so that it acts safely regardless of the action of the user."

Falck and his team integrated various machine learning and control algorithms into a single bot.

"We focused on the holistic design rather than perfecting a single task, with the hope that we can use this platform to explore further use cases in the future," Falck said.

So far, Robot De Niro has proven itself a promising tool in the healthcare industry, successfully assisting both caregivers and those receiving care. However, researchers acknowledge that to better perform in that setting, it needs to expand its awareness of the world.

"We aim to implement further safety improvements by increasing DE NIRO's awareness, such as a 360-degree camera rig or the application of a 3D LIDAR," Falck said. "In addition, we will improve the point-cloud based manipulation techniques to allow a more generic grasping capability and enhance the currently rather rudimentary autonomous capabilities for navigation to act smoothly in unknown environments."

The research is published in the journal arXiv.

By posting a comment you confirm that you have read and accept our Posting Rules and Terms of Use.
Advertisement
RELATED ARTICLES
Cooking with artificial intelligence
Outsourcing danger: The robots tasked with dangerous jobs
Artificial skin may pave way for empathetic robot caregivers
Facial recognition in the healthcare industry
Team develops mole-bot for drilling, space applications
Advertisement