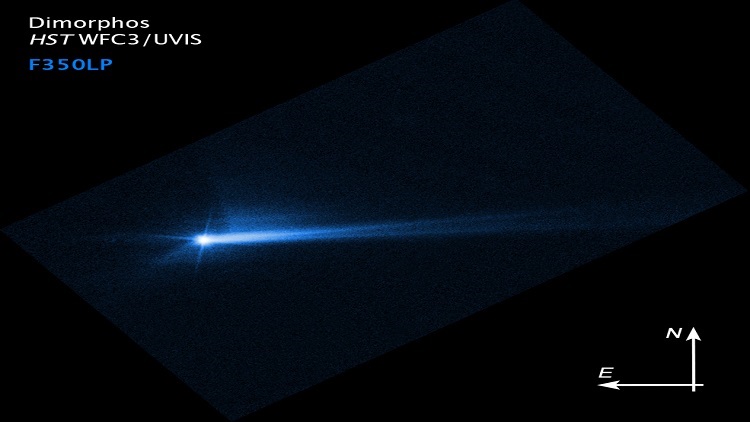 The intentional collision of the Double Asteroid Redirection Test (DART) spacecraft with asteroid Dimorphos on September 26, 2022, demonstrated the power of humankind to alter the orbit of a heavenly body.

The success of the NASA planetary defense test hinged on the ability to shorten the orbit of Dimorphos by at least 73 seconds. Researchers telescopically tracking and measuring the after-effects of DART’s impact have confirmed the new orbital path around parent asteroid Didymos is now 11 hours and 23 minutes. The mission shortened the orbit by an impressive 32 minutes.

Astronomers will next shift focus to examining how debris displaced by the impact affected the transfer of momentum from the spacecraft to Dimorphos.

NASA reaffirms: neither Didymos nor its moonlet Dimorphos pose any threat to Earth.

By posting a comment you confirm that you have read and accept our Posting Rules and Terms of Use.
Re: NASA mission accomplished: Asteroid trajectory transformed
#1

It sounds like the effect was much more than expected. Either the asteroid weighed a lot less than estimated or, more likely, a lot of momentum was carried away by parts of the asteroid blasted away by the energy of the collision.

See the entire discussion on CR4, the Engineering Community
Advertisement
RELATED ARTICLES
Prepare to watch a NASA spacecraft collide with an asteroid
Watch the launch of NASA’s asteroid redirection mission
Video: NASA’s DART mission is a smashing success
NASA awards SpaceX a contract to crash a spacecraft into an asteroid
Watch: Video projections float in mid-air. NASA plans for asteroid deflection. And a start-up promises a commercial solar car in two years.
Advertisement