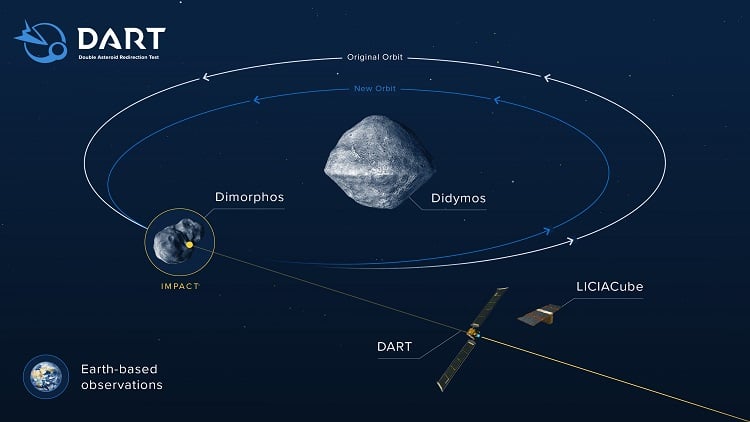 After launching atop a SpaceX Falcon 9 on November 24, 2021, NASA's Double Asteroid Redirection Test (DART) probe has its sights firmly locked on the asteroid Didymos and its smaller companion rock, Dimorphos. On Monday, September 26, 2022, DART will careen into Dimorphos at about 14,000 miles per hour.

The mission, which is managed by the John Hopkins University Applied Physics Laboratory (APL), is a first attempt to determine if the course of an asteroid can be altered should an Earth-threatening asteroid be discovered in the future.

DART will deliberately impact Dimorphos at speeds of 4.1 miles per second (6.6 km/s). The impact should cause the asteroid's orbital speed to change by a fraction of a percent and this shift should be enough to change its orbital period by several minutes. According to NASA, the change in Dimorphos' orbit around Didymos will be observed and measured by telescopes on Earth, to see whether the mission has succeeded.

By posting a comment you confirm that you have read and accept our Posting Rules and Terms of Use.
Advertisement
RELATED ARTICLES
Watch the launch of NASA’s asteroid redirection mission
Watch: Video projections float in mid-air. NASA plans for asteroid deflection. And a start-up promises a commercial solar car in two years.
Video: NASA’s DART mission is a smashing success
NASA awards SpaceX a contract to crash a spacecraft into an asteroid
NASA's Asteroid-Sampling Probe Reaches Target
Advertisement