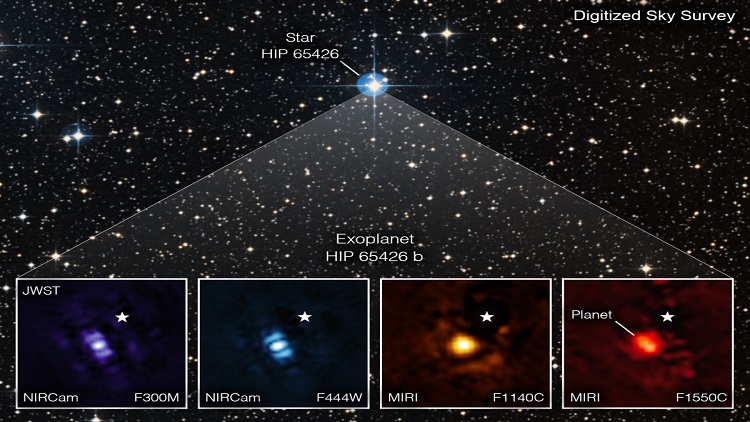 The James Webb Space Telescope (JWST) has recorded its first direct images of an exoplanet: HIP 65426 b, orbiting the star called HIP 65426.

The gas giant was first discovered in 2017 and documented by the European Southern Observatory’s Very Large Telescope in Chile using short infrared wavelengths of light. The new image reveals greater detail due to the longer infrared wavelengths used by JWST and is captured in four different bands of infrared light by the coronograph-equipped Near-Infrared Camera (NIRCam) and the Mid-Infrared Instrument (MIRI). According to preliminary data published in ArXiv, NIRCam imaged the exoplanet at wavelengths of 3.0 μm and 4.44 μm, seen as purple and blue. MIRI recorded it at 11.4 μm and 15.5 μm, seen as yellow and red.

Estimated to be about 385 light-years from Earth and between 15 and 20 million years old, HIP 65426 b appears to be between six and 12 times the mass of Jupiter.

By posting a comment you confirm that you have read and accept our Posting Rules and Terms of Use.
Advertisement
RELATED ARTICLES
Video: Report Outlines Exoplanet Research Roadmap for NASA
NASA retires the Spitzer Space Telescope
Video: Countdown to liftoff for James Webb Space Telescope
NASA’s New Exoplanet Hunter Will Begin Searching for Earth-like Worlds Orbiting Other Stars This Year
Name that exoplanet
Advertisement