A protective enclosure is now under construction for a former reactor on the U.S. Department of Energy's (DOE's) Hanford site in Washington, established in 1943 as part of the Manhattan Project. The K East Reactor is the seventh at the site to be placed in interim safe storage.

The K East Reactor was built to produce plutonium for U.S. defense applications and operated from the mid-1950s until 1971. The steel cocoon is designed to protect the reactor building while radioactivity in the deactivated reactor core decays over the next several decades, making it safer and easier to complete disposition of the reactor in the future. 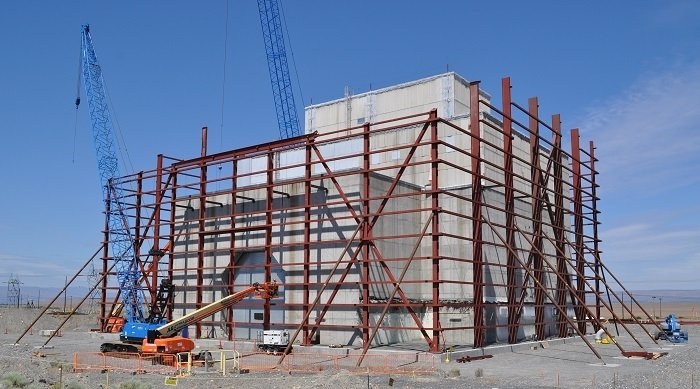 Steel columns, each weighing up to 28 tons, rise around the reactor. Source: DOE

Construction of the structure's steel frame, shown in the time-lapse video above, was initiated after workers finished backfilling and compacting the area around the former reactor before pouring a 6 ft thick concrete foundation to support the new enclosure. The first steel columns were placed in mid-May.

The structural steel skeleton, with metal siding on the walls and roof to fully enclose the building, is expected to be finished by the fall of 2022. The completed structure will be more than 150 ft wide and 120 ft tall, and has been designed to allow for routine inspections of the reactor, which will take place every five years.

By posting a comment you confirm that you have read and accept our Posting Rules and Terms of Use.
Advertisement
RELATED ARTICLES
Lead-cooled fast reactor construction underway in Russia
Westinghouse Proposes UK Deployment of Small Modular Reactor
Differentiating local from global sources of plutonium pollution in soil
Method Can Aid in Tracing Illicit Nuclear Material
Robotic Help for Fukushima Nuclear Cleanup
Advertisement