Demolition, cleanup and capping activities have been completed at the Hanford Site’s former Plutonium Finishing Plant in Washington, once deemed one of the most hazardous facilities in the U.S. Department of Energy’s (DOE's) Office of Environmental Management cleanup complex.

Final project demobilization and documentation activities, which were initiated in October 2016 by contractor Central Plateau Cleanup Company, included pressure-washing equipment, surveying for contamination and removing fencing. In November 2021, more than 900 truckloads of sand and gravel were spread over the plant’s 580 square mile footprint, which once included four large facilities and several support buildings that produced nearly two-thirds of the nation’s supply of plutonium metal and oxides. The thick cover of sand and gravel is fortified with a fixative to protect the environment from any residual contamination and to limit the effects of water, wind and heat until underground waste sites are remediated. 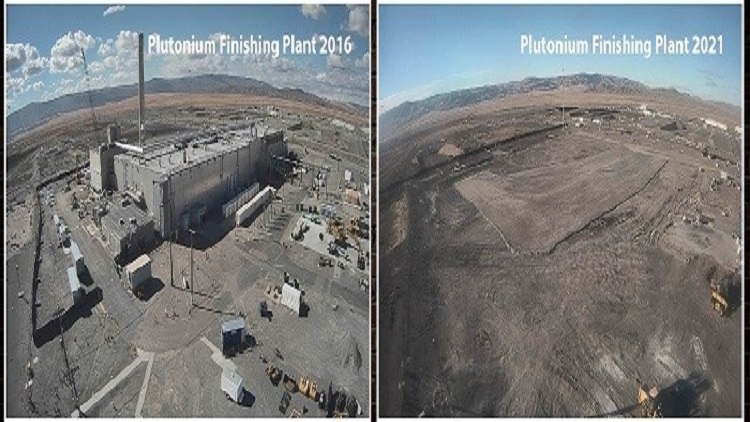 Demolition and cleanup, initiated in 2016, were recently completed. Source: DOE

Placement of the cover follows the removal late last summer of the remaining rubble from demolition of the Plutonium Reclamation Facility and soil sampling beneath the concrete slabs of that facility and the nearby Americium Recovery Facility, two of the former plant’s main buildings. The demolition rubble was safely packaged and disposed at the Environmental Restoration Disposal Facility, Hanford’s onsite engineered landfill.

In operation from 1949 to 1989, the Plutonium Finishing Plant was the last step in plutonium production at the Hanford Site, near Richland, Washington.