Westinghouse wants to work with UK on the deployment of small modular reactor (SMR) technology. The company, part of the Toshiba group, says it had presented a "proposal to partner" in phase two of a study being carried out by the UK government into the nation's potential use of SMRs.

Phase one—an SMR feasibility study commissioned by the government and carried out by the UK's National Nuclear Laboratory (NNL) —was published in December last year, according to World Nuclear News. There are SMR concepts for a range of applications including electricity production, district heating, desalination and plutonium management.

Westinghouse says that its unsolicited proposal outlines a "shared design and development model" under which the company would contribute its SMR conceptual design and then partner with UK government and industry to complete, license and deploy it. 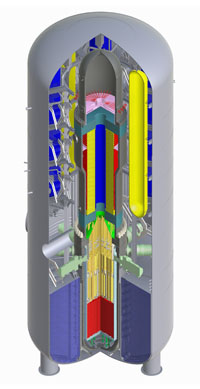 A cut-away of Westinghouse's SMR. Source: WNNIts SMR design is a 225 MWe integral pressurized water reactor with all primary components located inside the reactor vessel. It leverages the technology of the AP1000 nuclear power plant design.

The partnership would be structured as a UK-based enterprise jointly owned by Westinghouse, the UK government and UK industry, the company says.

Westinghouse announced in March that the U.S. Nuclear Regulatory Commission (NRC) had approved its testing approach for its SMR design. The company says that the approval is a “significant step” toward design certification and will reduce the time ultimately needed to license its SMR.

The company-designed Sizewell B plant, in Suffolk, England was built in 1988 and is currently the only pressurized water reactor and last nuclear reactor built to date in the UK. In addition, three Westinghouse AP1000 units are planned for the Moorside site in West Cumbria. When fully operational, the units will deliver about 7% of the UK's future electricity needs.

The AP1000 plant design received a design certification amendment from the NRC in 2011. Eight units are currently under construction at four sites in the U.S. and China.

SMRs are defined as nuclear reactors generally 300MWe equivalent or less, designed with modular technology using module factory fabrication, pursuing economies of series production and short construction times. This definition, from the World Nuclear Association, is closely based on those from the IAEA and the US Nuclear Energy Institute.

NRC to Develop Rules for Emergencies at Small Modular Reactors

By posting a comment you confirm that you have read and accept our Posting Rules and Terms of Use.
Advertisement
RELATED ARTICLES
Westinghouse Receives Approval for Small Modular Nuclear Reactor Testing
NRC to Develop Rules for Emergencies at Small Modular Reactors
NRC approves a new nuclear reactor design
Westinghouse and EDF aim to jointly develop an SMR
NuScale Reactor Nears One Milestone, With More to Follow
Advertisement