Differentiating local from global sources of plutonium pollution in soil

The ability to assign plutonium levels measured in soil to local or regional nuclear power, global pollution or natural sources was demonstrated at the now decommissioned Dounreay nuclear breeder reactor and research site in Scotland.

Minuscule quantities of plutonium can be found in the environment due to reactions in naturally occurring uranium in the ground and due to human activity related to the nuclear fuel cycle. Absent human 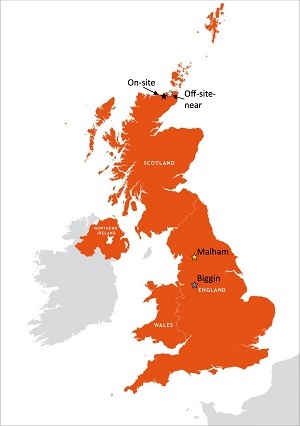 Soil sampling sites. Source: Malcolm J. Joyce et al.intervention, the amount of plutonium in the environment varies slowly with time due to the long half-lives of most isotopes and relatively slow natural transport mechanisms. Differentiation between local sources of plutonium and global fallout can help inform decisions concerning nuclear legacies, particularly the clean-up of contaminated land.

Researchers from ETH – Zürich (Switzerland), Lancaster University (U.K.) and Dounreay Site Restoration Ltd (Scotland) used accelerator mass spectrometry to analyze soil samples from the Dounreay site and from a site 700 km distant. The analysis identified local and global contributions to trace-level plutonium in soil samples from the former fast-breeder reactor site at Dounreay. The plutonium-239 concentration at Dounreay agrees with prior estimates of global fallout in northern zones, and an excess is apparent relative to distant, non-industrial sites in the U.K.

The findings published in Nature Communications could be of value in determining the extent to which clean-up of local plutonium levels might be warranted.

By posting a comment you confirm that you have read and accept our Posting Rules and Terms of Use.
Advertisement
RELATED ARTICLES
Japan to Close Troubled Fast-breeder Nuke
Video: Cleanup complete at plutonium finishing plant
Silver chloride mitigates radioactive contamination of soil
New Detector for Hotspot Mapping at Sellafield
Cave-in Occurs at Hanford Waste Site
Advertisement