Pinpointing a particle accelerator inside a solar flare 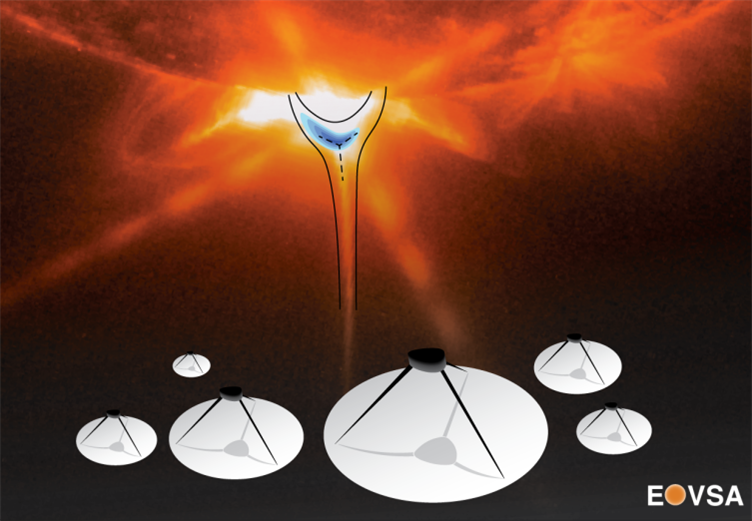 Solar flares are some of the most violent eruptions in our solar system, but despite their massive energy — equivalent to a hundred billion nuclear bombs exploding at the same time — experts have yet to explain how these spontaneous eruptions on the Sun are able to release particles to Earth, approximately 93 million miles away, in less than 60 minutes.

Researchers at New Jersey Institute of Technology (NJIT) recently determined the precise area where solar flare charged particles are pushed to near-light speed in a study published in Nature.

The latest discoveries were made viable by observations of an X-class solar flare in 2017 by NJIT's Expanded Owens Valley Solar Array (EOVSA) radio telescope, which confirmed a high performance particle accelerator located at the edge of the flare's brightest point in the Sun's outer atmosphere, known as the "cusp region," where the explosion's ambient plasma is transformed to high-energy electrons.

“The findings in this study help explain the long-standing mystery of how solar flares can produce so much energy in mere seconds,” said Gregory Fleishman, corresponding author of the paper and distinguished research professor of physics at NJIT's Center for Solar-Terrestrial Research. “The flare unleashes its power in a much vaster region of the Sun than expected by the classic model of solar flares. Although others have postulated this must happen, this is the first time the specific size, shape, and location of this key region has been identified, and the efficiency of the energy conversion to particle acceleration inside the flare has been measured.”

The team was able to quantify the energy spectrum of electrons at hundreds of places of an X-class solar flare generated by a rearrangement of magnetic field lines along the Sun's surface on September 10, 2017, using EOVSA's distinctive microwave imaging abilities.

“EOVSA’s spectral imaging gave us a comprehensive map of the flare’s thermal plasma as it evolved second-by-second. But to our surprise, what we found was a mysterious hole in the thermal plasma map that began developing at the flare’s cusp,” said Gelu Nita, NJIT research professor and co-author of the paper. “More than that, as thermal particles in the region disappeared, the hole was then densely filled with non-thermal, high-energy particles."

This research was supported by grants from the National Science Foundation.

By posting a comment you confirm that you have read and accept our Posting Rules and Terms of Use.
Advertisement
RELATED ARTICLES
The Day a Solar Storm Almost Brought on Nuclear War
New software auto-detects flare smoke in refineries
Watch as online tool reveals gas flaring events around the world
See Better Images of Sunspots During the Total Solar Eclipse
Video: Blazar Identified as a Source of High-Energy Neutrinos
Advertisement