An acoustic camera produces an image where the intensity of each pixel represents the amplitude of acoustic waves coming from the corresponding direction. This is akin to an optical camera producing an image where each pixel represents the intensity of light coming from the corresponding direction.

For an optical camera, the lens focuses light coming from a certain direction to the corresponding pixel on the sensor or film. Each pixel in the image represents the intensity of light coming from a specific azimuth (angle in the horizontal plane) and elevation (angle in the vertical plane). The lens does this by slowing and delaying the electromagnetic (light) waves hitting the lens, by precisely the right amount, so that all waves coming from a certain direction arrive in phase in the focal plane, at the position of the corresponding pixel.

An acoustic camera does much the same thing, except that the work of the lens is replaced by a digital computational engine that processes signals captured by an array of microphones (see Figure 1). 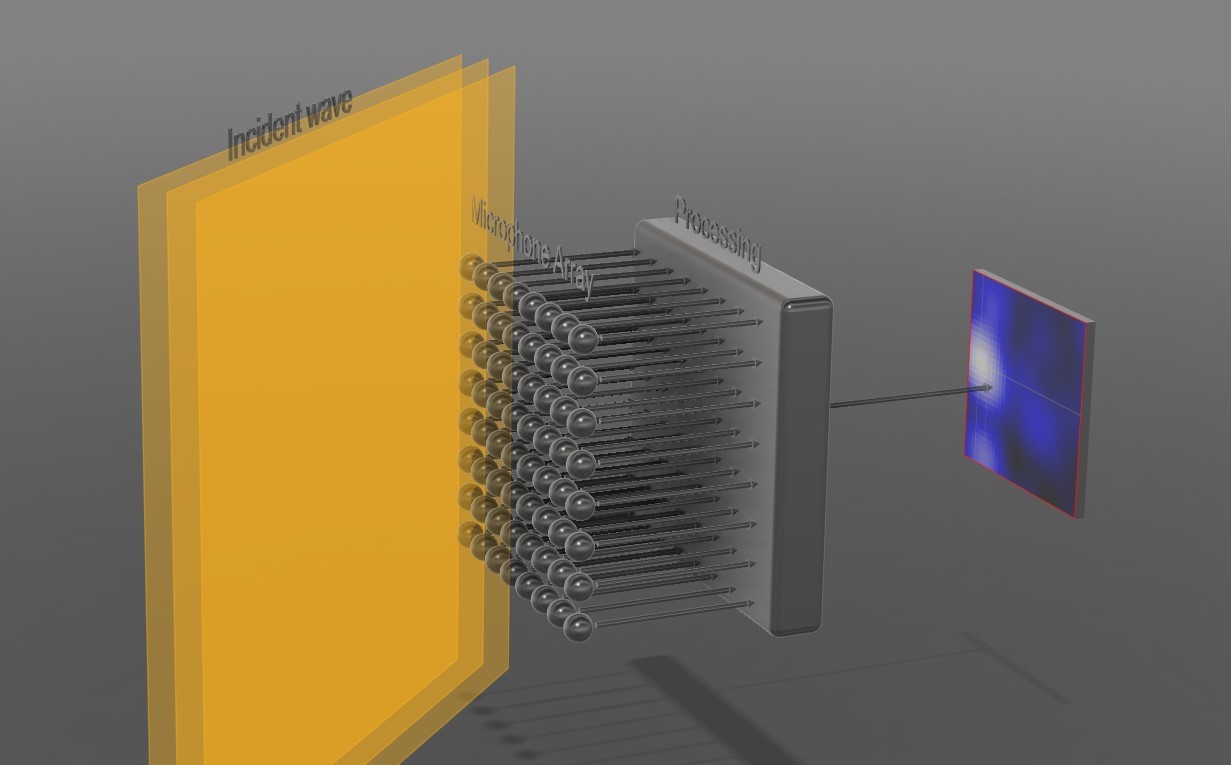 An array of microphones captures the sound waves hitting the array from many different directions. For every pixel in the image, a massively parallel digital processing engine applies specific delays, and sums the acoustic signals from every microphone, so that the signals from a specific angle of incidence (azimuth and elevation) arrive in phase. Figure 1 shows that process for a single pixel. Note that a different and precisely adjusted delay (filter) must be applied to every path, from every microphone in the array to every pixel in the image. In the simplest implementation, the intensity of every pixel is calculated as the energy of that sum signal, averaged over a specific length of time.

For an optical camera, as well as for an acoustic camera, the image resolution is proportional to the ratio of aperture size to wavelength.

For an acoustic camera on the other hand, the frequencies of interest often extend to quite low frequencies (long wavelengths). For instance, the wavelength at 100 Hz is 3.4 m. To have a good resolution at such low frequency would require an array of at least 8 to 10 times as large (25 to 30 m wide). This is usually not practical. Therefore, for acoustic cameras the resolution is typically poor at lower frequencies and improves only as the frequency of interest increases.

For an acoustic camera, the maximum frequency is limited by the spatial separation between two adjacent microphones. The half wavelength of the maximum frequency sampled by the microphones must be wider than the distance between two microphones. Otherwise, the array is not able to distinguish between sources that are within the field of view, and sources that are outside, leading to artifacts such as phantom images.

For ACAM_64, the distance between microphones is 23 mm, so that frequencies up to 7.5 kHz can be imaged properly. In practice the array is sampled at 16 kHz, with a Nyquist frequency of 8 kHz. The anti-aliasing filters in the camera ensure that the signal energy is low above 7.5 kHz.

Features only possible for an acoustic camera

Because the processing is implemented digitally, a few features are possible that cannot be done in an optical camera:

Because of the constraint on the aperture, and the range of wavelengths analyzed, an acoustic image is typically low-resolution. Therefore, it is usually difficult to attribute a particular hot zone of the acoustic image to the actual piece of equipment generating the noise.

For ACAM_64, the company developed an Optical Image Kit, which consists of a USB camera, a mount to attach the camera to the top of the microphone array, and software to support the real-time streaming and merging of the optical and acoustic images.

Figure 2 shows a purely acoustic image. Figure 3 shows an acoustic image with the optical image superimposed. It is easier to see where the noise is coming from. 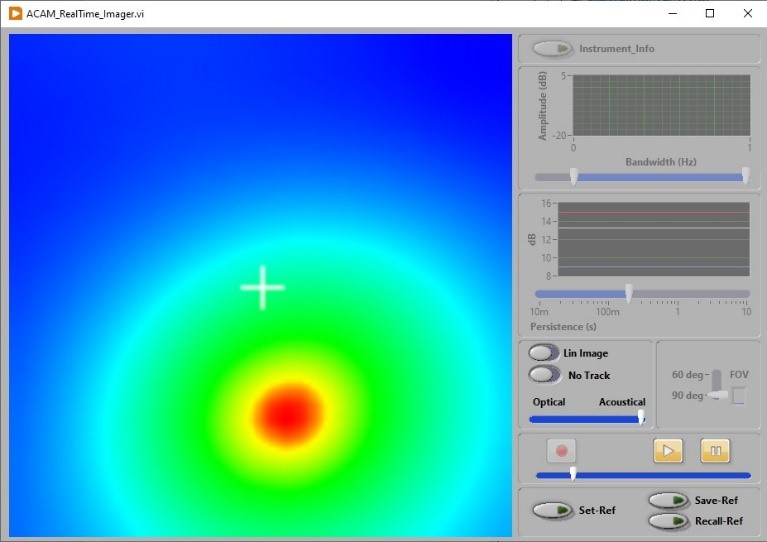 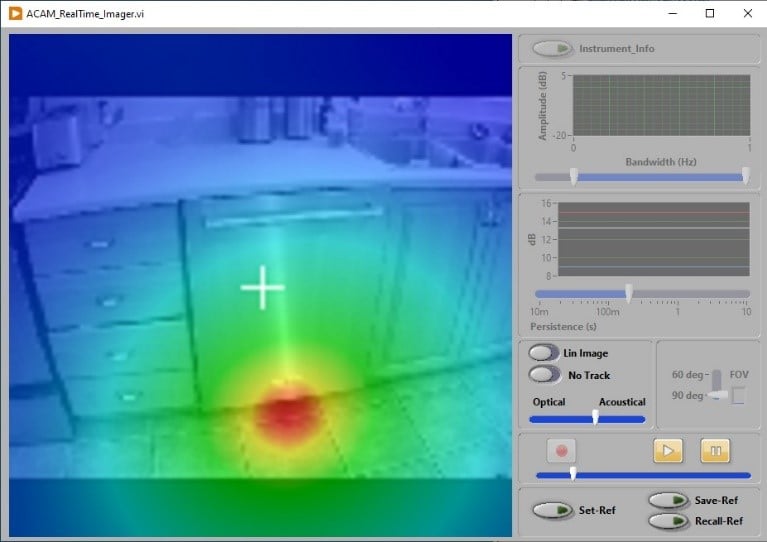 By posting a comment you confirm that you have read and accept our Posting Rules and Terms of Use.
Advertisement
RELATED ARTICLES
CCD Camera: A Growing Universe of Uses
CMOS Cameras: How They Work and How to Use Them
Camera Could Wrap Around Objects for New Point of View
Top 3 FMC/TFM enhancements of the new OmniScan X3 flaw detector explained
48-Mpixel CMOS Image Sensor Supports 8k Image Res
Advertisement