Camera Could Wrap Around Objects for New Point of View

Columbia University engineers have developed a sheet camera that can be wrapped around everyday objects to capture images that cannot be taken with one or more conventional cameras.

If such an imaging system could be manufactured cheaply, it could be wrapped around any number of objects, from street poles to furniture, cars and even clothing, to capture wide, seamless images with unusual fields of view. This design could also lead to cameras the size of a credit card that a photographer could simply flex to control its field of view, the researchers say. 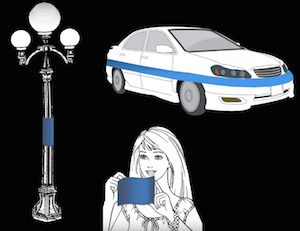 A flexible camera could be wrapped around any number of objects, from cars to street poles. Image credit: Columbia Computer Vision Laboratory. The team, led by Shree Nayar, professor of computer science at Columbia Engineering, designed and fabricated a flexible lens array that adapts its optical properties when the sheet camera is bent. This optical adaptation enables the camera to produce high-quality images over a wide range of sheet deformations.

The "flex-cam" requires two technologies—a flexible detector array and a thin optical system that can project a high-quality image on the array.

Attaching a rigid lens with fixed focal length to each detector on the flexible array would have resulted in "gaps" between the fields of view of adjacent lenses when the camera is bent—causing the captured image to have missing information, or appear "aliased." To solve this problem, the team developed an adaptive lens array made of elastic material that enables the focal length of each lens in the sheet camera to vary with the local curvature of the sheet in a way that mitigates aliasing in the captured images.

The inherent optical adaptation of the lens is passive, avoiding the use of complex mechanical or electrical mechanisms to independently control each lens of the array. The researchers arrived at their passively adaptive lens array by optimizing its geometry and material properties. They then fabricated the prototype lens array using silicone and demonstrated its ability to produce high image quality over a wide range of deformations of the sheet camera.

"The adaptive lens array we have developed is an important step towards making the concept of flexible sheet cameras viable," Nayar says. "The next step will be to develop large-format detector arrays to go with the deformable lens array. The amalgamation of the two technologies will lay the foundation for a new class of cameras that expand the range of applications that benefit from imaging."

By posting a comment you confirm that you have read and accept our Posting Rules and Terms of Use.
Advertisement
RELATED ARTICLES
An optical camera lens that is 1,000 times thinner, 100 times lighter than current lenses
ACAM_64 theory of operation
Flat lens designed for focus-free camera imaging
A First for Flat Lenses: Full-Color Imaging
Clear, Panoramic View from Miniature Lenses
Advertisement