Couple-charged device (CCD) cameras are a type of image capture device that utilize an image sensor to register visible light as an electronic signal.

These types of cameras do not use photochemical film to capture stills or video. Instead, the electronic signal is recorded to either an internal memory or a remotely connected device. Of the three types of digital cameras (the others being CMOS and CID), CCD cameras are the most developed and commonly used.

(Find CCD cameras by Specification or see the Engineering360 Directory of Suppliers.) 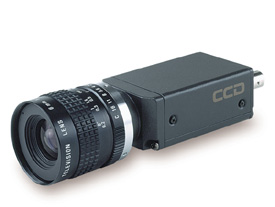 Couple-charged device camera Images source: Ken Rockwell; RMA Electronics Inc.Color is typically identified by the use of a color filter which will only allow one color of light from the visible spectrum into each pixel. The color filter is usually arranged in a Bayer filter pattern, which is used to average the colors of a 2 x 2 pixel square. Since the filter produces some inaccuracy, any discoloring is called interpolation.

A separate method of color identification employs separate image sensors with each dedicated to capturing part of the color image, such as one color, and the results are combined to generate the full color image. They typically employ color separation devices such as beam splitters rather than having integral filters on the sensors.

In CCD cameras, the level of photons recorded is converted to a proportional electrical signal. The ratio that is generated for photons-to-electrons is called quantum efficiency. These signals are carried away from the individual pixels to a charge amplifier, which turns the charge into a voltage. The camera has now created an authentic chronicle of the light it captured. For video cameras, this process is repeated many times per second (frame rate), and the voltages are digitized and stored in a memory. When the images are replayed, the camera has recorded a high number of sequential stills, creating the appearance of an object in motion.

By posting a comment you confirm that you have read and accept our Posting Rules and Terms of Use.
Advertisement
RELATED ARTICLES
CMOS Cameras: How They Work and How to Use Them
Molecular Imaging Hack Makes Cameras "Faster"
48-Mpixel CMOS Image Sensor Supports 8k Image Res
New Image Sensor Uses Advanced Back-Illuminated Pixel Technology
ACAM_64 theory of operation
Advertisement