CMOS Cameras: How They Work and How to Use Them

CMOS (complementary metal-oxide-semiconductor) cameras are a type of image capture device that utilize an image sensor to register visible light as an electronic signal. These types of cameras do not use photochemical film to capture images or video. Instead, the electronic signal is recorded to an internal memory or a remotely connected device. CMOS technology was rather immature until recently, and CMOS image sensors are increasing in popularity.

(Find CMOS cameras by Specification or see the Engineering360 Directory of suppliers.) 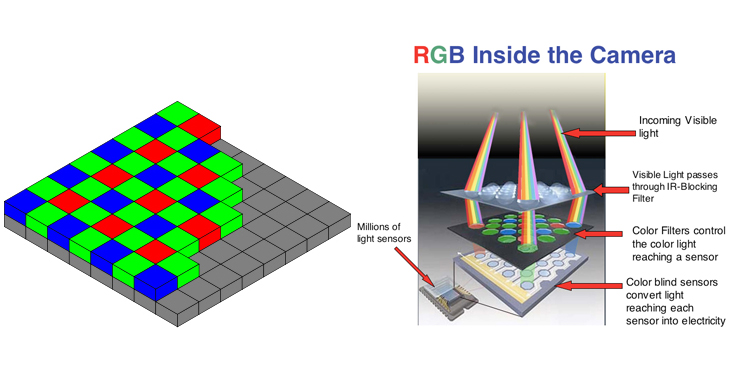 Bayer filter over image sensor. Image credits: Wikimedia, PhotoaxeAfter the camera's record function is initiated, its lens focuses light through the camera aperture, light filters, and onto the electronic image sensor. The image sensor is arranged in a grid pattern, with each individual square called a pixel. The image sensor cannot determine the color of light recorded, only the intensity. Color is typically identified by the use of a color filter, which will only allow one color of light from the visible spectrum into each pixel. The color filter is usually arranged in a Bayer filter pattern, which is used to average the colors of a 2 x 2 pixel square.

Since the filter produces some inaccuracy, any discoloring is called interpolation. A separate method of color identification employs separate image sensors with each dedicated to capturing part of the color image, such as one color, and the results are combined to generate the full color image. They typically employ color separation devices such as beam splitters rather than having integral filters on the sensors.

In CMOS cameras, multiple transistors amplify the photon-to-electron charge directly from the pixel. This allows each pixel to be addressed 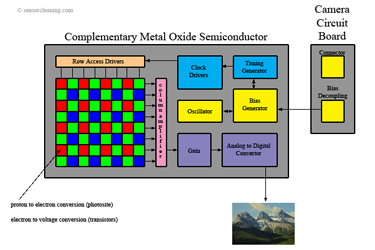 CMOS image sensor function. Image credit: Sensor cleaningindividually, or read in parallel as a set. There are two modes of CMOS image sensor—current mode and voltage mode. Current mode CMOS sensors utilize the linear relationship of the gate voltage of the readout transistor and the output current through the transistor to determine the intensity of the filtered light. Voltage mode CMOS sensors have a transistor in the pixel that acts as a source follower.

The voltage from the transistor is an estimated, linear function of the registered light intensity at each pixel. This process is repeated many times per second (frame rate), and the voltages are digitized and stored in a memory. When the images are replayed, the camera has recorded a high number of sequential stills, creating the appearance of an object in motion.

When recording images, several camera characteristics should be considered based upon the image quality required, playback method and features that may enhance video capture under certain recording conditions.

Regardless of the image capture method of the camera, the lens remains the most critical component regarding high-quality video capture. Lenses are meant to refine optical aberrations that occur when recording video, and there is a wide variety of camera lenses for various recording scenarios. Lenses come in several standard uses and mounting styles. 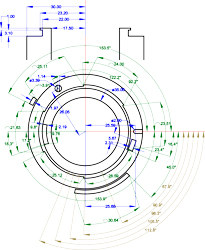 Once a voltage has reached the analog-to-digital converter, it is assigned a binary code for interpretation. Each pixel is granted a value corresponding to signal amplitude according to the bit depth of the converter. An ADC capable of 10 bit resolution assigns each pixel a value between 0 and 1,024 (210), representing the light intensity on a greyscale.

Resolution is the quality of the image when viewed. For digital cameras, resolution depends upon the number of pixels (horizontally and vertically). At a standard size, more pixels sharpen details on a photograph, but when enlarged the pixels become apparent in an effect called pixelization. This is similar to grain on film. Digital camera resolution is commonly measured in megapixels (MPx), with each mega representing one million square pixels. High-definition is regarded as a resolution of 1,280 x 720 pixels or more.

Measured in frames per second, this is the number of image captures. The human eye is capable of differentiating between 10 to 12 separate images per second; anything more and the rapidly changing images creates the illusion of movement. Frame rate of individual cameras is very much reliant upon the playback method and territory, or the specific application of the camera, both of which are covered in depth below.

This is responsible for the duration that light reaches the image sensor or film. It directly controls the exposure rate along with the aperture. Slower shutter speeds result in blurred motion capture. Since CMOS cameras are electronically activated, most do away with the manual shutter. Instead, digital cameras can offer an electronic shutter, which is faster since there are no moving parts.

How well a camera captures images in low-light situations is measured in LUX. It is a number that represents how sensitive a camera is, and a lower number LUX sees better in less light. Color and monochrome cameras measure LUX differently.

Video recording is often regulated by the specifications assigned by the standard adopted in each territory. These standards ensure compatibility of video recording and playback within conforming mediums, such as analog and digital transmissions (i.e. PAL, ATSC, DTMB) and hardware video storage devices (VHS and DVD). Often, cameras are produced to film images to match these standards. Consult GlobalSpec's Video Camera Selection Guide for the summary and implementation of each standard.

Camera positioning is accomplished by the use of various types of mounts. Extendable and adjustable arms are common so cameras can be repositioned. Brackets are reserved for the most utilitarian of designs. Stands, such as unipods and tripods, offer a stable base while making the camera accessible to operators. Finally, many cameras come with the option of handheld or shoulder-mounted operation.

Security cameras are often mounted to a wall or ceiling by an adjustable arm bracket with standard hardware, providing pan and tilt functions. This

Industrial and scientific-based cameras are sometimes placed within a housing to protect the device from hostile environments. Industrial cameras are usually mounted with brackets or a separate type of mount that limits the device's movements. They also may provide resistance to mechanical vibration, which is common in manufacturing settings. Scientific cameras utilize whatever mount best suits the research, which may mean atypical placement. These mounts may apply by temporary means, may be exceptionally small, or the camera may not be mounted at all. Scientific cameras need the highest degree of flexibility among mounting options.

Entertainment cameras are valued for their aesthetic picture quality, and are almost always mounted on a stand of some type since they are attended. The stand may include wheels to provide object tracking, a suspension system to keep objects in focus, and other conveniences for the camera operator. Entertainment cameras also have unique mounts produced for them to capture irregular camera angles, or may have entire vehicles dedicated to their operation.

These specifications are often optional on video cameras, but depending on the use that will enhance video quality.

Video cameras are very versatile, and as such, hundreds of styles with different features are available depending upon the application. Common industries served include, broadcast/entertainment, industrial, scientific and security.

These types of cameras are useful for recording feature films, television shows and commercials, news broadcasts, sports events, web casts and other types of motion capture that is meant for high-quality distribution. These cameras are characterized by a standardized frame rate to make their replay mechanisms compatible for use in a particular market's entertainment devices. These types of cameras almost always use film stock instead of digital frame rendering because of the lack of image noise when displayed at large dimensions. The most common film stock is 35 mm film. These types of cameras are sometimes used for unique recording and replay experiences, such as 3D films or IMAX theaters. These cameras will also have a sound recording unit, whether integral or part of a double-system recording.

Industrial cameras are meant for troubleshooting, accident detection and investigation, counting, color mark recognition, flaw detection and remote monitoring. The video quality of industrial-employed cameras is usually unimportant, provided it can accurately record and depict motion imaging. In fact, due to the environment of their use, some features may be purposefully left out to reduce costs. These types of cameras are usually of the digital quality. Common uses include: cameras mounted on plumbing snakes; those used to monitor conditions in a toxic environment; providing a digital readout or analysis of products on an assembly line; and those mounted on the bumper of cars that provide an in-dash feed of the car's reverse clearance. Line scan cameras can be helpful in quality assurance monitoring. These cameras capture data in a single row of pixels, rather than in a full display. This is helpful for monitoring a stream of moving materials, like on an assembly line.

Cameras meant for scientific research and studies usually have some proprietary feature not incorporated into other camera styles in order to aid in a specific function of the research. This could include low-light settings, submersible components, extremely high frame rates, clean-room compatibility, recordings of different light spectrums, miniature sizes, or resistance to chemicals and wear. These cameras can be used to research everything from space exploration to molecular biology. They usually have high connectivity, so the image feeds can be relayed to multiple recording devices, transmitters, or computers. Scientific cameras can often do away with a synched audio feed in order to cut down their adverse expense.

Security cameras are prevalent in many urban areas, as well as locations where valuable goods may be kept. These types of cameras are designed to provide remote surveillance and to protect both individuals and property from trespass. By centralizing multiple security feeds, a trained security officer can provide a ubiquitous guard, which is often enough to discourage potential criminals. These cameras are also used to provide a reliable chronicle of events, which can be used to identify and prosecute alleged criminals. Security cameras are commonly produced with a tamperproof or protective housing. They are also available with extremely small footprints or disguises to aid in espionage or covert surveillance. Audio feeds are optional with this type of camera, but some cameras placed in pugnacious locations can automatically detect gunshots and alert authorities.