Scientists from the University of Bristol in the U.K. have developed a new drive system for flapping wing autonomous robots that does not rely on motors and gears.

Current iterations of micro-flying robots rely on motors and gears to achieve up and down movement. Yet, with that capability comes added weight and complexity. As such, the Bristol team created a direct drive artificial muscle system called the Liquid-amplified Zipping Actuator (LAZA). 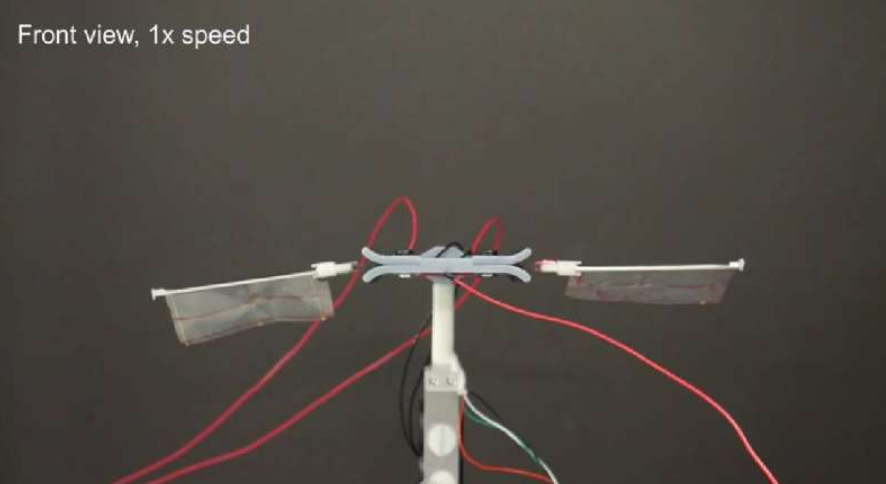 According to its developers, LAZA can achieve wing motion without the added weight of rotating parts or gears and, consequently, it can fly across a room at 18 body lengths per second.

Dr. Tim Helps, lead author and developer of the LAZA system, explained: "With the LAZA, we apply electrostatic forces directly on the wing, rather than through a complex, inefficient transmission system. This leads to better performance, simpler design, and will unlock a new class of low-cost, lightweight flapping micro-air vehicles for future applications, like autonomous inspection of off-shore wind turbines."

Enhanced with a simplified flopping mechanism, the Bristol team is eyeing LAZA as the stepping-stone for future micro-flying robots capable of search and rescue, inspection and environmental monitoring tasks.

The research is detailed in the article, Liquid-amplified zipping actuators for micro-air vehicles with transmission-free flapping, which appears in the journal Science Robotics.

By posting a comment you confirm that you have read and accept our Posting Rules and Terms of Use.
Advertisement
RELATED ARTICLES
A flapping-wing drone inspired by birds
Watch: Solar-powered wings flap faster than a butterfly
Watch: BionicFlyingFox is the Latest Robot from Festo's Bionic Learning Network
Researchers create an insect-inspired microrobot
Army seeks to develop 'muscular' robots
Advertisement