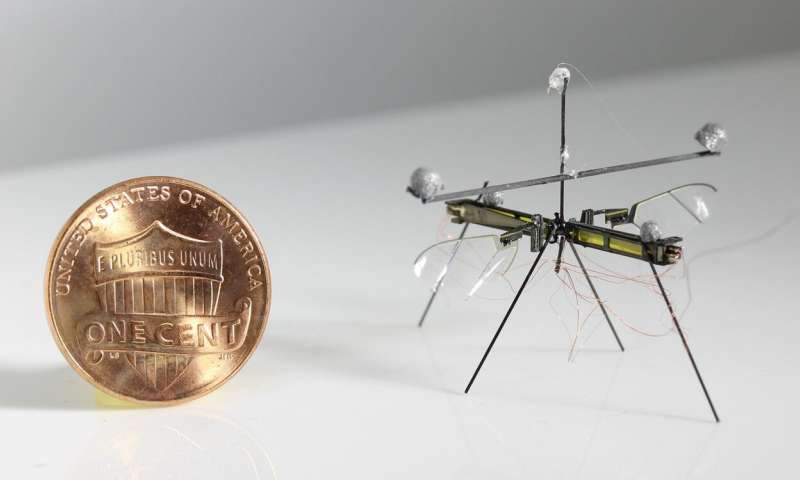 RoboFly. Source: Chukewad et al.Improving upon the design of insect-inspired microscopic robots, researchers from the University of Washington have developed a new flying microrobot capable of multi-modal locomotion.

Dubbed the RoboFly, the microrobot is reportedly an improvement upon its predecessor, the Robobee, which was developed by researchers from Harvard University. Setting the 74 mg RoboFly apart from similar insect-inspired microrobots is its ability to move through the air, on the ground and to hover over the surface of water, according to its developers. This is due to RoboFly’s flapping wings, which are powered by piezoelectric actuators, enabling it to fly and hover.

Another key difference between RoboFly and similar robots is its unique design, which simplifies the fabrication process. Microrobots are generally assembled using extremely tiny components under a microscope. This mode of fabrication is reportedly difficult with the potential for losing critical components during assembly. As such, RoboFly’s chassis is composed of a single folded sheet of laminate, eliminating the need to assemble several microscopic components.

To see an earlier iteration of the RoboFly, watch the accompanying video that appears courtesy of the University of Washington.

By posting a comment you confirm that you have read and accept our Posting Rules and Terms of Use.
Advertisement
RELATED ARTICLES
These robots will make your skin crawl: Part 2
Soft 3D-printed microbots created by Linköping University researchers
"RoboBees" Can Perch to Save Energy
Watch a drug-delivery microrobot navigate a colon
Watch: Flexible origami robot can fold more than 90 degrees
Advertisement