With support from the U.K.-based Carbon Trust and its Offshore Wind Accelerator program, naval architecture firm Robert Allan Ltd. of British Columbia, Canada, has developed a design for a methanol-fueled RAptor 2400 Crew Transfer Vessel (CTV). The design is intended to bring the offshore wind industry closer to eliminating carbon emissions from the supply chain.

As a marine fuel, methanol provides emissions benefits that are similar to natural gas when it comes to reducing carbon dioxide, nitrogen oxides, sulfur oxides and particulates, but without the need for cryogenic or pressurized fuel tanks. This reduces capital cost, saves space and allows more fuel to be carried. With the advent of green methanol – produced from sustainable low carbon sources including renewable electricity with carbon capture – well-to-wake carbon emissions can be reduced to net zero by switching to green methanol as it becomes more widely available for a seamless transition requiring no changes to the vessel. 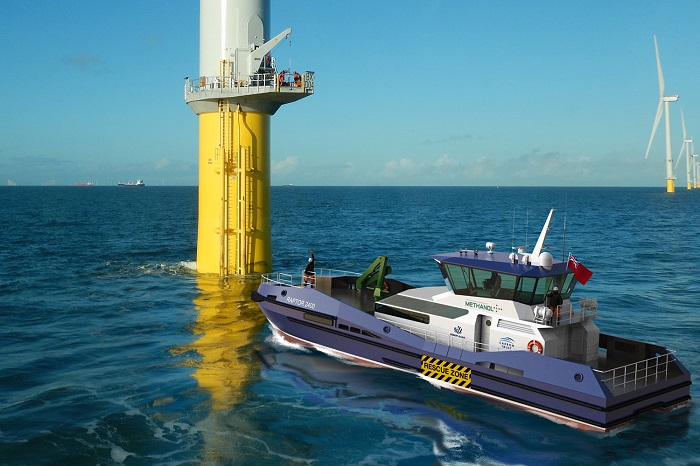 Offering a methanol capacity of 12 m3 and installed power of 1,800 kW, the CTV is propelled by four Scania DI16 main engines, each rated at 450 kW at 2,100 rpm. Converted to run on methanol by ScandiNAOS, these engines meet IMO Tier III emissions limits without any additional after treatment. Two engines in each demi-hull are connected to a dual-input gearbox driving a servogear controllable pitch propeller system that caters to both maximizing sprint speed and bollard push performance. Extensive in-house computational fluid dynamics analysis was used to achieve a speed in excess of 25 knots at full load displacement.

By posting a comment you confirm that you have read and accept our Posting Rules and Terms of Use.
Advertisement
RELATED ARTICLES
Ferry marks five years of methanol-fueled operation
Methanol-powered Ship Ready to Sail
Ethane-Fueled Engine Readied for Use in LEG Carriers
Video: Methanol to fuel sustainable shipping initiative
Method to Convert CO2 to Methanol
Advertisement