A bright future for US solar energy

Solar energy has the potential to supply up to 40% of the nation's electricity within 15 years — a 10-fold increase over current solar output, but one that would require massive changes in U.S. policy and billions of dollars in federal investment to modernize the nation's electric grid, a new federal report says.

Solar energy has the potential to provide 40% of U.S. electricity and accelerate grid decarbonization supply by 2035 without raising electricity prices. To attain these goals, solar deployment will need to grow by an average of 30 GW annually through 2025 and ramp up to 60 GW per year by 2030 — four times its current deployment rate — to total 1,000 GW of solar deployed by 2035. According to the Solar Futures Study, prepared for the U.S. Department of Energy (DOE) by the U.S. National Renewable Energy Laboratory, solar energy could provide 1,600 GW on a zero-carbon grid by 2050 and produce more electricity than consumed in all residential and commercial buildings nationwide. 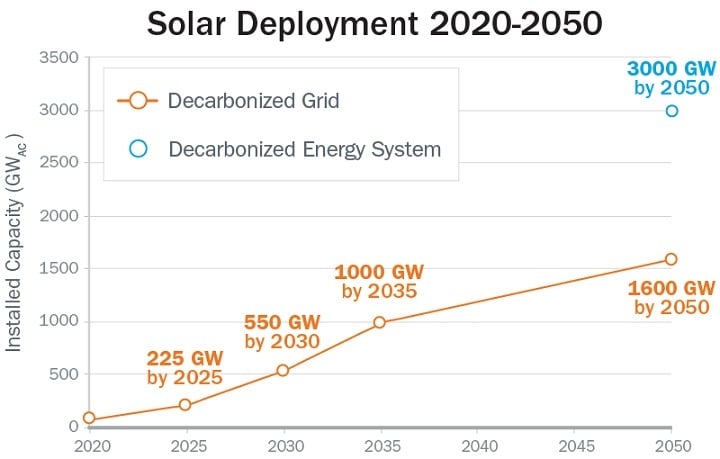 Preliminary modeling shows that decarbonizing the entire energy system could result in as much as 3,000 GW of solar due to increased electrification. Source: DOE

Preliminary modeling shows that decarbonizing the entire U.S. energy system could result in as much as 3,200 GW of solar due to increased electrification of buildings, transportation and industrial energy and production of clean fuels. The solar energy sector is projected to employ 500,000 to 1.5 million people across the U.S. by 2035, and reduced carbon emissions and improved air quality are expected to result in savings of $1.1 trillion to $1.7 trillion, far outweighing the additional costs incurred from transitioning to clean energy.

By posting a comment you confirm that you have read and accept our Posting Rules and Terms of Use.
Re: A bright future for US solar energy
#1

I like the word Potential used here. There is also the Potential to screw up the planet with a coverage of solar cells so vast they could be seen from any roof top, let alone space. So the potential exists to create more waste and reflect more heat into space and potentially cause an imbalance on earth that potentially sterilizes the soil and creatures who live here.

Of course this is all potential conjecture, but statistically correct. Therefore the potential hype is just that, hype and future justification to make huge profits and let us all know that they will soon cover the country side with solar panels.

Nothing like a pre-brainwashing cycle to clear the mind.

Re: A bright future for US solar energy
#2

Why slide over the disposal of the solar panels? That is the major drawback to solar power. Until the problem of disposal is solved, we are better off with wind power and other power supplies that can be recycled or disposed of safely. The blades of wind generators and the rest of the generator can be recycled. Even the concrete in the foundation can be ground up to make aggregate for asphalt paving. Recycling may not always be the most economical and, therefore, must be considered in the cost of the power produced.

Re: A bright future for US solar energy
#3
In reply to #2
IQ

Unfortunately, the public are gullible and care not a jot. They just want electric at their finger tips. So economical process's do not play a role in any of this.

Data storage centres are being built like crazy in Norway and Sweden today. The cold water cools the centre. The warm water then dumped into the fjords to raise the fjord temperature. HMM! The fish move away so that is an environmental disaster in the making.

There is not enough electricity to power the centres, so they build more wind farms and an estimated 40% of wind generated power goes to running the centres. All so that people can store their accumulated crap on a server, (cloud) rather than deleting the crap.

There is no logical sense at all, so most will not worry about the costs. A few may, but then they are pissing in the wind.