Engineers from Michigan State University (MSU) are designing transparent solar panels that could be retrofit to existing glass-covered buildings to generate electric power.

Traditional opaque solar panels such as silicon soak up much of the sun's light, including visible light, and convert it to energy. A transparent panel allows visible light to shine through and making light that is invisible to the human eye—such as ultraviolet and infrared—do the work.

By making the solar panels transparent, MSU materials scientist and chemical engineer Richard Lunt and his team are creating the potential for them to cover existing windows. 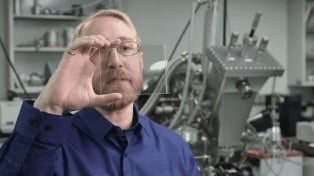 Richard Lunt says that transparent solar panels can be retrofit to cover existing windows and generate electricity. Image credit: National Science Foundation.However, making the panels clear is a challenge. So the team came up with ways to layer patterns onto the cell in a way that makes them uniformly transparent. The transparent solar cell under development incorporates thin coatings of organic and inorganic nanostructure materials that selectively harvest the parts of the solar radiation spectrum that are not visible to the eye.

"We actually used a variety of different stencils to pattern our devices,” Lunt says. Each active material has its own pattern. After every layer, the researchers put down a new stencil and in this way build complex structures, he adds.

Team member Margaret Young is testing whether the same process can be used on thin plastic.

"This is much lighter and much more flexible, so instead of rebuilding windows, we could just put this over an existing window," she says.

Lunt says that he expects that in the next 20 years, this type of technology will be deployed extensively—turning cities and landscapes into solar harvesting systems, surfaces and solar farms without the aesthetic issues that today's opaque solar panels create.