Keeping silicon detectors in the Large Hadron Collider (LHC) cool is a priority for CERN, operator of the 27 km long particle accelerator in Geneva, Switzerland. The current refrigeration systems containing synthetic refrigerants with high global warming potential (GWP) will be replaced with a cooling system based on R744 refrigerant grade carbon dioxide, which has zero ozone depletion potential, negligible GWP and is not flammable.

The silicon detectors used to reconstruct the tracks of charged particles in collider experiments need to operate at a stable temperature to maximize the signal to noise ratio, and the operational temperature must be kept below 0° C to minimize the detrimental effects of radiation on their performance. The planned upgrade of the LHC for the High Luminosity program, starting in 2026, will increase by a factor of 10 the density of the particles created by the collision and in turn will increase the radiation level in the detectors by an order of magnitude. 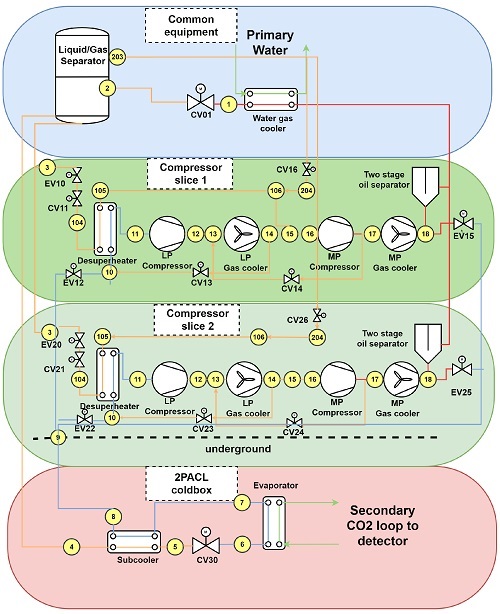 The large silicon detectors capable of coping with the increased density of tracks will require a new cooling system, capable of evacuating from the detector volume a nominal power up to 300 kW for ATLAS and 500 kW for CMS, while ensuring a temperature of the refrigerant in the detector heat exchangers down to -43° C.

The first prototype of the primary system developed by collaborators from Norwegian University of Science and Technology, CERN and the University of Cape Town (South Africa) has been installed in a laboratory at CERN. Two compressor modules, each with one compressor per compression stage and a common unit, are being evaluated in a chiller designed to cope with a maximum cooling capacity of 75 kW at a suction pressure of 6 bar. The primary refrigeration sub-system installed on the surface provides CO2 at -53° C to the CO2 pumped loops installed 100 m underground and rejects the heat exchanged.

A paper describing the new refrigeration system is published in Applied Sciences.

By posting a comment you confirm that you have read and accept our Posting Rules and Terms of Use.
Advertisement
RELATED ARTICLES
Upgrades Planned for LHC During Two-Year Shutdown
Watch: First Precise Measurement of W Boson Mass
What is the ideal refrigerant?
The LHC Successfully Accelerated Its First Atoms
The New Couple in Particle Physics: Higgs Boson and Top Quark
Advertisement