The Large Hadron Collider (LHC), the powerful particle accelerator located at CERN near Geneva, Switzerland, restarted on April 22, 2022, after a three-year shutdown for maintenance and upgrades. The reactivation launched Run 3, the LHC's third science run, which will perform experiments through 2024.

Upgrades include improving the insulation on the diodes in over 1,200 magnets used to control the particle beam. During the reactivation, operators fired up the LHC's 16.7 mile-long (27 km) ring to inject two beams of protons in opposite directions at an energy level of 450 billion electronvolts. The next goal is to deliver collisions to the experiments at a record energy of 13.6 trillion electronvolts.

"These beams circulated at injection energy and contained a relatively small number of protons. High-intensity, high-energy collisions are a couple of months away,” said Rhodri Jones, who leads CERN's Beams department. "But first beams represent the successful restart of the accelerator after all the hard work of the long shutdown." 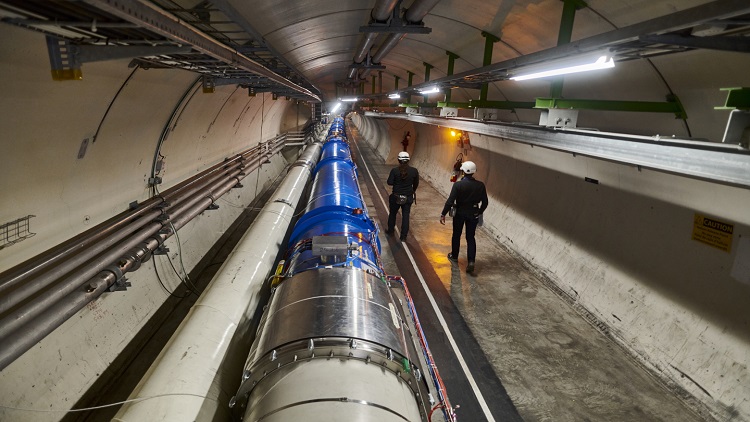 A chain of LHC dipole magnets inside the tunnel. Source: CERN

Other improvements involved replacing 22 superconducting magnets and cryogenic units, and adding additional instruments. The beam dump used to absorb the particle beams at the end of each cycle has been consolidated into an assembly of graphite and nitrogen gas sealed in seven tons of iron shielding. The dump has also been physically disconnected from the accelerator by 33 ft (10 m) to prevent vibrations from the dump being transmitted to the ring.

By posting a comment you confirm that you have read and accept our Posting Rules and Terms of Use.
Advertisement
RELATED ARTICLES
Upgrades Planned for LHC During Two-Year Shutdown
The LHC Successfully Accelerated Its First Atoms
DOE taps Brookhaven Lab for particle collider
Video: Designing the future circular collider
Watch: First Precise Measurement of W Boson Mass
Advertisement