SpaceX selected by NASA to launch first outpost around the moon 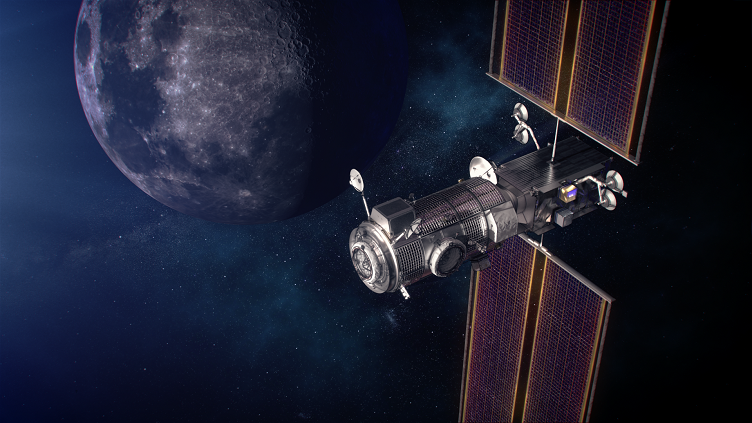 An artist rendering of NASA's Lunar Gateway is critical element to not just the organization’s planned lunar missions but also the eventual missions to Mars. Source: NASA

SpaceX will launch NASA’s Power and Propulsion Element (PPE) and Habitation and Logistics Outpost (HALO), the foundation for the Lunar Gateway — which is the long-term orbiting outpost around the moon.

The Lunar Gateway is critical to not just the organization’s planned lunar missions but also to the eventual missions to Mars. The PPE and HALO are targeted to launch together no earlier than May 2024 on a SpaceX Falcon Heavy rocket from Launch Complex 39A at NASA’s Kennedy Space Center in Florida.

The PPE is a 60 kilowatt class solar electric propulsion spacecraft that will provide power, high speed communications, attitude control and the capability to move the Gateway to different lunar orbits. This will allow access to the moon’s surface more than ever before, NASA said.

The HALO features pressurized living quarters for astronauts who visit the Gateway, either on their way to the moon or to Mars. HALO will provide command and control and serve as a docking hub for the outpost. It will also support science investigations, distribute power, provide communications for visiting vehicles and lunar surface expeditions, and offer supplemental life support systems aboard the Orion spacecraft.

The Lunar Gateway will be about one-sixth the size of the International Space Station (ISS) and will function as a way station located tens of thousands of miles at its farthest distance from the lunar surface, in near rectilinear halo orbit. The Gateway will also serve as a rendezvous point for Artemis astronauts traveling to lunar orbit aboard Orion prior to transit to low-lunar orbit and the surface of the moon.

This news comes on the heels of NASA recently announcing that Firefly Aerospace will deliver 10 experiments to the moon as part of the first payloads for lunar investigations. The announcement was the sixth award for lunar surface delivery that NASA has given out for future space missions.

By posting a comment you confirm that you have read and accept our Posting Rules and Terms of Use.
Advertisement
RELATED ARTICLES
Video: Concept Lunar Lander that Docks with NASA’s Lunar Gateway
Video: New Details Emerge About the Mars Base Camp
A Robot Race to the Moon
NASA selects four small businesses for its Artemis moon mission
Boeing’s Deep Space Gateway Concept Unveiled
Advertisement