Boeing revealed its concepts for a deep space gateway and transport system that could serve as a platform to send humans into deep space, near the moon and beyond.

The concepts are part of the Next Space Technologies for Exploration Partnerships (NextSTEP) program, in which NASA is partnering with six companies to develop concepts and prototypes for deep space exploration. 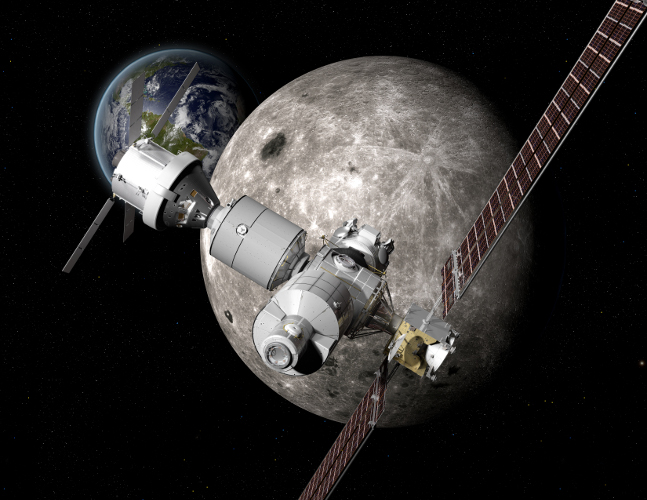 The Deep Space Gateway would be delivered to cislunar space near the Moon by NASA’s Space Launch System. “The ability to simultaneously launch humans and cargo on SLS would allow us to assemble the gateway in four launches in the early 2020s,” said Pete McGrath, director of global sales and marketing for Boeing’s space exploration division.

The Deep Space Transport vehicle would be able to dock with the gateway, facilitating longer range missions. For instance, a human crew could depart in the transport vehicle from the gateway on a mission to Mars. Once there, they could conduct scientific missions in orbit, send robotic craft for ground missions, or take a lander module for human surface exploration of the red planet.

Both the gateway and vehicle would be powered by a Solar Electric Propulsion (SEP) system that leverages established hardware designs from Boeing’s 702 satellite family. Boeing is working on the power system as part of a program in NASA’s Space Technology Mission Directorate (STMD).

NASA’s plan for the gateway describes capabilities, including a power bus, a spacecraft dock, an airlock and a logistics module to support research aboard the station. “The gateway could move to support robotic or partner missions to the surface of the moon, or to a high lunar orbit to support missions departing from the gateway to other destinations in the solar system,” said William Gerstenmaier, associate administrator for Human Exploration and Operations at NASA Headquarters in Washington.

By posting a comment you confirm that you have read and accept our Posting Rules and Terms of Use.
Advertisement
RELATED ARTICLES
Video: Concept Lunar Lander that Docks with NASA’s Lunar Gateway
NASA orders 6 Orion spacecraft from Lockheed Martin
Video: New Details Emerge About the Mars Base Camp
Space Launch System Will Propel Orion on Exploration Missions to the Moon
SpaceX selected by NASA to launch first outpost around the moon
Advertisement