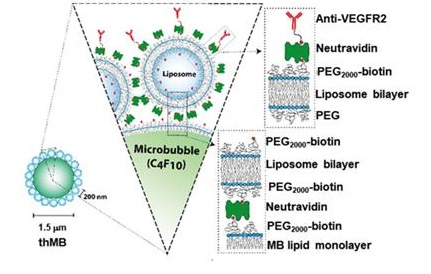 Schematic depiction of a therapeutic microbubble. Source: Nicola Ingram et al.delivery. Microbubbles were loaded with a cancer drug and antibodies attracted to the growth hormone found in high levels in the blood vessels supplying a tumor. With the antibodies serving as a navigational aid, the microbubbles became concentrated at tumor sites in animal models. Ultrasound pulses were then administered to break up the bubbles and release the drug.

In addition to more focused targeting, the payload- and antibody-laden microbubbles remained within the circulatory system much longer than when antibodies were not present. The combination increased therapeutic agent concentrations at tumors, improving treatment efficacy and allowing for lower dosing.