A noninvasive method to deliver drugs to the brainstem, considered a high-risk target for surgical intervention, could be useful in addressing difficult-to-treat brain tumors. The technique developed at Washington University in St. Louis entails administering drugs through an intranasal spray, followed by use of focused ultrasound to allow the drug to penetrate and accumulate in deeper layers of the tissue. Therapeutic benefits are delivered to 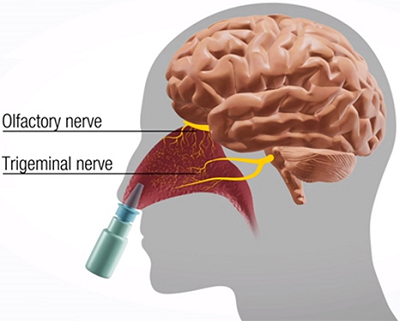 Ultrasound and microbubble-based contrast agent can be paired with intranasal administration to direct a drug to the brainstem. Source: Washington University in St. Louis the ultrasound-targeted tissue.

The intranasal pathway relies on olfactory and trigeminal nerves to carry nanoparticles directly to the brain, bypassing the blood brain-barrier, an obstacle to drug delivery in the brain. Once injected into the bloodstream during an ultrasound scan, the microbubbles comprising the contrast agent behave like red blood cells, traveling through the body as the heart pumps. Upon reaching the area where the ultrasound is focused, the microbubbles expand and contract, effectively delivering and dispersing drugs from the nose directly to the space surrounding blood vessels.

The microbubbles pump the drug toward the brainstem instead of circulating through the whole body with potentially toxic side effects. The researchers used positron emission tomography to confirm minimal accumulation of intranasal-administered nanoparticles in the lungs, heart and other major organs.

The method was successfully demonstrated in mice for the delivery of gold nanoclusters, and the next step is to assess the method’s therapeutic efficiency in administering chemotherapy drugs for the treatment of diffuse intrinsic pontine gliomas, a childhood brain cancer with a five-year survival rate of 2%.

By posting a comment you confirm that you have read and accept our Posting Rules and Terms of Use.
Re: Watch: Treating Brain Cancer with Ultrasound and Aerosols
#1