Numerous exoskeletons have been developed for both military and industrial use cases. However, if these devices, which amplify a human’s ability to carry or trek over long distances, are not aligned with the user properly, it could cause pain or injury. Consequently, researchers at the National Institute of Standards and Technology (NIST) have developed a new measurement method to test whether the exoskeleton and the person wearing it are moving smoothly. 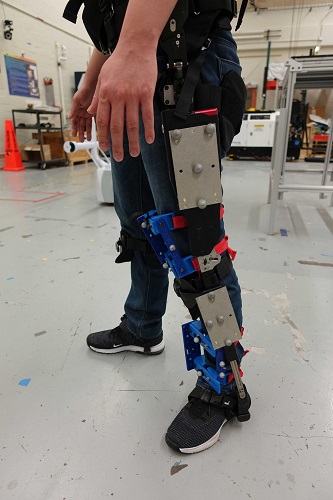 The exoskeleton was tested to design better and more comfortable systems for the future. Source: NISTUsing an optical tracking system (OTS), like motion capture techniques used by filmmakers, specialized cameras track the movements of an exoskeleton and test pieces, called “artifacts,” which are fastened to a user.

"The ultimate goal is to strap these artifacts on to the person, put on the exoskeleton, compare the difference in the person wearing these artifacts versus the exoskeleton and see if they move the same," said Roger Bostelman, a robotics engineer at NIST. "If they move in concert with one another, then it fits correctly. If they move differently, it is not fit correctly, and you could determine adjustments from there."

During testing, NIST aimed to capture the motion of the knee and constructed two artificial legs as test beds. One leg featured an off-the-shelf prosthetic knee and the other incorporated a 3D-printed knee that more closely mimicked the real thing. Metal plates were then fastened to the legs with bungee cords to represent exoskeletal limbs or test artifacts attached to the body.

The team then used the OTS and a digital protractor to measure knee angles through a full range of motion. Once the two sets of measurements were compared, the team was able to determine their system was capable of tracking leg position.

Once the testing was done, NIST designed and 3D printed adjustable artifacts — such as a knee brace — to adapt the method for use on an actual person’s leg. These were then mounted to a full-body exoskeleton worn by a person who then did several sets of squats.

This showed that the tester’s leg and the exoskeleton moved in harmony. However, there were moments the body moved while the exoskeleton did not. To provide extra strength, the exoskeleton uses springs, which engage and disengage as the person moves. The exoskeleton pauses when the springs shift modes, resisting users’ movements.

NIST said the next steps include using computational algorithms to analyze the positional data and to develop artifacts for the arm, the hip and all joints of the exoskeleton and then perform similar tests in order to maximize the effectiveness of exoskeletons.

The complete research can be found here.

By posting a comment you confirm that you have read and accept our Posting Rules and Terms of Use.
Advertisement
RELATED ARTICLES
Biomechanical Exoskeleton Crowdfunding Campaign Started
Exoskeleton Technology Takes a Step Forward
Regaining the ability to walk independently
Exoskeleton Boosts Leg Capacity in Soldiers
Exoskeleton Aids Children’s Mobility
Advertisement