Regaining the ability to walk independently

Walking without crutches — this is something that people with certain neuromuscular disorders dream of. With the exoskeleton Autonomyo, this dream can now be made a reality. The active walking aid supports the weakened muscles and enables an intuitive sequence of movements that mimics the natural sequence. The additional power is supplied by six micromotors. To facilitate a harmonious interaction between the exoskeleton and its user, FAULHABER developed an innovative all-in-one component motor with a torque sensor.

Medical science distinguishes between more than 800 different neuromuscular disorders, and most affected patients suffer from severely restricted mobility. This is because, even though these disorders have many different causes and develop in many different ways, they all have one thing in common: muscle weakness (muscular dystrophy), which is progressive in many cases.

"If the muscle weakness occurs in the legs, walking becomes increasingly difficult, and eventually it becomes impossible without something to lean on," explained Mohamed Bouri, leader of the research group for Rehabilitation and Assistive Robotics (REHA Assist) at the Swiss Technical University of Lausanne (EPFL). "The muscles are still functional but they cannot muster enough strength for the patients to stand stably or move their legs independently. As you would expect, this has an enormous impact on the patient's range of movement and quality of life. The effects are similar to those of hemiplegia after a stroke. Our aim was to overcome these limitations as much as possible using motorized support –– therefore, still taking advantage of the patient’s contribution to his own movements.”

The group leader is referring to conventional exoskeletons already in use leaning on humanoid inspired technology. These devices enable paraplegic people to walk without a crutch, but they weigh more than 40 kg. With only 25 kg, Autonomyo, developed by REHA Assist, is much lighter, and it works with the patient's weakened but still partially functioning musculoskeletal system. 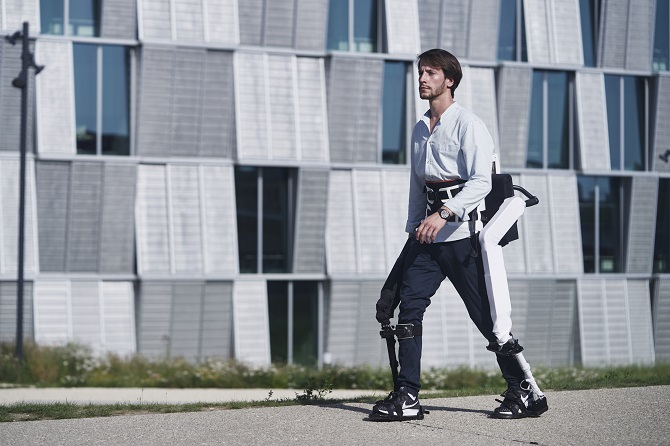 The device is fastened with a corset around the trunk and cuffs around the legs of the user. On each side, three motors enable movement by supplying the power that the muscles are lacking. In each case, one motor is responsible for the flexion and extension of the hip and another motor does the same for the knee. The third motor supports abduction and adduction of the leg at the hip joint — in other words, the lateral movement of the leg away from the midline of the body. All together, the motors help the patient to maintain their balance and to walk upright. In a recently conducted clinical study including persons with walking impairment, Autonomyo proved to be working as intended: The exoskeleton provided support while allowing freedom of movement, following the users’ intentions. The range of joint motion and gait cadence were not negatively affected.

Feedback from the magnetic measurement system
It is absolutely crucial that the device assists gait according to the user’s intention. "The initial trigger to change position — that is, to start walking — is expressed as a small change in the lower limb position," explained Mohamed Bouri. "We detect it by combining the information from an inertial measurement unit, eight load sensors at the soles and the encoders of the motors that act as joint position sensors. All these data contribute to the assistance of balance." When walking, the interaction between the device and the user is crucial. A torque sensor developed by FAULHABER is responsible to sense this interaction and thus to precisely implement the assistance strategy.

The conventional technology for torque detection uses expansion strips on components; these strips are deformed by the force exerted. The weak point of their construction is the adhesive bond with which they are attached. The developers in the Advanced Engineering group have replaced these strips with a high-resolution measurement system, enabling realization of a deviation of less than 1.5% in the measurement range of plus/minus 30 newton meters.

This value plays a vital role in controlling the Autonomyo exoskeleton, which is of course also supplied with numerous other values. "Adjusting the device to the individual patients requires very differentiated calibration of the entire system," explained Mohamed Bouri. "Using the various parameters and the feedback from the movement, the software calculates the control signals for the drives."

Drive power and development potential
The six drive units in each device are supplied by FAULHABER. Their core component is the 3274 BP4 brushless motor with a diameter of 32 mm. It offers the most power of any motor in its size class available on the market and its power is transmitted by a 42 GPT planetary gearhead with a shaft produced especially for this application. A magnetic IE3 encoder supplies the position data to the controller. The torque sensor is integrated in the gearheads of the four motors for the flexion/extension movements.