Although cogeneration of power and plant process steam has been well known to industrial personnel for decades, combined heat and power (CHP) technologies are taking on more importance as energy conservation increases.

In the power industry, combined-cycle power plants have now cracked the 60% net efficiency barrier and even higher efficiencies are possible at CHP plants. The use of a combustion turbine(s) for power production is becoming more common for CHP. In this application, the turbine exhaust heat is used to generate steam in (appropriately named) heat recovery steam generators (HRSG). 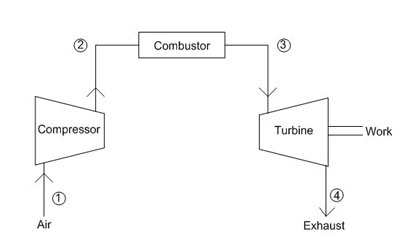 A CT operates similarly to a jet engine via the following steps, which are part of a fundamental thermodynamic cycle known as the Brayton Cycle.

Key points of a CT include fast start times, low capital cost as compared to many other energy production methods, simplicity of fuel feed and minimal operations and maintenance issues. These benefits are important in the power industry, especially the fast start times required during peak power periods when demand is highest. However, for industrial processes with continuous steam and electrical requirements, steady and efficient operation is more important.

A stand-alone CT can, at most, achieve approximately 35% net efficiency. Thus, including steam generation for power generation or process use is 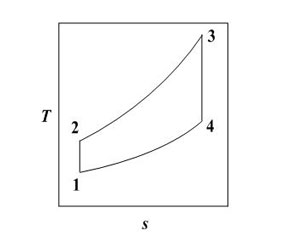 The temperature-entropy diagram for an ideal Brayton cycle.mandatory to achieve high efficiencies. Heat recovery steam generators (HRSGs) may range from a straightforward single-drum design to much more complicated units that generate high-pressure steam to drive power turbines. An example for the latter is shown in the diagram.

In this particular design, the condensate is split between the circuits, with a relatively small flow to the low-pressure (LP) steam network and the bulk of the flow to the intermediate pressure (IP) and high-pressure (HP) circuits. The diagram shows all of the generated steam driving a power turbine. However, flexible arrangements are quite possible.

A less complex scenario that may be better for cogeneration applications is a combustion turbine with a single-pressure HRSG, perhaps without a steam turbine (or condensing steam turbine), where the HRSG operation is less complex than with multi-pressure units. For example, a colleague and I recently prepared the water balance for a proposed power project in which one scenario called for two combined-cycle units, one with a CT and a three-pressure HRSG and the other with a CT and a single-pressure HRSG that would partly supply steam for power augmentation. 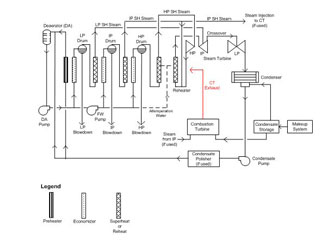 Schematic of a three-pressure HRSG. From my own experience at two utilities, but especially from working with clients at industrial plants and combined-cycle power plants, it is obvious that water and steam treatment/chemistry control often are neglected, at least compared to other processes. However, plant shutdown due to power or steam system failure can cost a plant millions of dollars in production lost and materials replacement. Some failures have even resulted in injury and death. The following list sums up many of the most important details of steam generator chemistry that have evolved over the past decades.

Brad Buecker is a process specialist with Kiewit Power Engineers, in Lenexa, Kan. He has 35 years of experience in, or affiliated with, the power industry, much of it in chemistry, water treatment, air quality control and results engineering positions with City Water, Light & Power in Springfield, Ill., and Kansas City Power & Light Company’s La Cygne, Kan., station. He has a B.S. in chemistry from Iowa State University with additional course work in fluid mechanics, energy and mass transfer balances and advanced inorganic chemistry. He is a member of the ACS, AIChE, ASME, CTI, and NACE. Buecker is also a member of the ASME Research Committee on Power Plant & Environmental Chemistry and the program planning committee for the Electric Utility Chemistry Workshop.