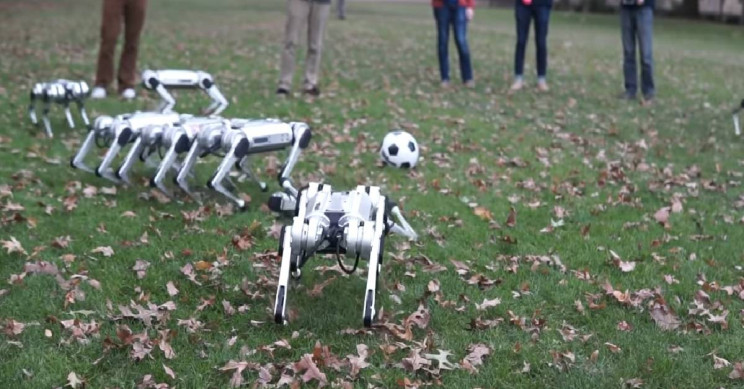 Weighing just 20 lbs each, the quadruped robots are driven by 12 different motors and remotely controlled by operators. They can travel at speeds of up to 6 mph and can perform backflips, play soccer and hide in piles of leaves. The team intends to develop even more algorithms that will enable the robots to accomplish additional tasks in the future.

In development for several years, the mini cheetah is an offshoot of its 90 lb predecessor, the Cheetah 3, which was significantly larger and more costly to manufacture.

Its developers envision that the latest iteration of cheetah robots will be appropriate for applications such as elder care and emergency response scenarios.

MIT’s mini cheetah robots are not the only robots to take inspiration from nature. Recently, researchers at the University of California have created an insect sized robot that is virtually indestructible like a cockroach for search and rescue scenarios. Meanwhile, scientists at the Institute of Robotics of the Scuola Superiore Sant’Anna di Pisa created a crab-like robot to collect samples of microplastic polluted waters.

Similarly, researchers from New York University’s Tandon School of Engineering and the University of Western Australia have developed a robotic fish to ward off invasive fish species.

By posting a comment you confirm that you have read and accept our Posting Rules and Terms of Use.
Advertisement
RELATED ARTICLES
Inspired by nature: Robots
UC Berkeley turns robot dogs into robot guides for the visually impaired
Robots to take over tasks at both in-person and virtual tradeshows
Team develops line of soft robots inspired by the cheetah
Electromechanical robots that are faster than cheetahs
Advertisement