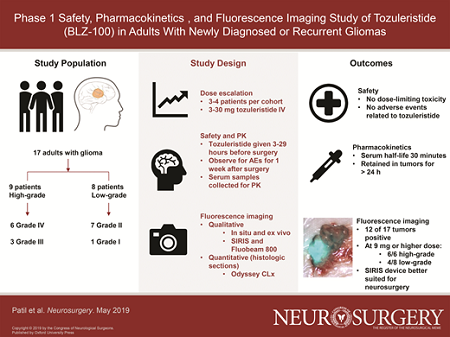 Source: C. Patil et al./Neurosurgeryof malignant brain tumors during surgery. A custom high-sensitivity near-infrared camera engineered by Cedars-Sinai Medical Center in California is coupled with tozuleristide, an imaging agent containing a synthetic version of an amino acid compound found in scorpion venom. The compound formulated by Blaze Bioscience of Washington binds to tumor cells and is attached to a fluorescent dye that glows with the help of a near-infrared laser.

The technology is expected to be particularly applicable for delineating hard-to-treat gliomas, which invade a wide spectrum of brain tissue types and do not respond well to available therapies. Seventeen adult patients with brain tumors received varying doses of the imaging agent before surgery during clinical trials, after which most tumors were observed to fluoresce, including both high- and low-grade gliomas. Post-surgical monitoring for 30 days revealed no adverse effects of the imaging compound.

The clinical trial also demonstrated that the experimental camera system simultaneously captured both near-infrared and white-light images, a feat that would normally entail use of multiple bulky cameras in a surgical environment. The new system permits real-time switching between the two imaging views, enabling clinicians to delimit and remove cancerous tissue. A broader clinical trial involving pediatric brain tumors is currently underway in the U.S.

By posting a comment you confirm that you have read and accept our Posting Rules and Terms of Use.
Advertisement
RELATED ARTICLES
Glowing Tumors Help Surgeons Cut Out Brain Cancer
Robot that extracts scorpion venom receives patent
Researchers Use Oxygen-filled Microbubbles to Weaken Tumors' Resistance to Radiation
A New Method to Extract Scorpion Venom
Implant Could Improve Breast Cancer Survival
Advertisement