Bioprinting technology offers scope for increasing the supply of functional replacement organs, However, a barrier to building functional tissue replacements has been the inability to print the complex vasculature needed to supply nutrients to densely populated tissues. This challenge has been overcome with the development of the stereolithography apparatus for tissue engineering (SLATE), a new open-source bioprinting method. 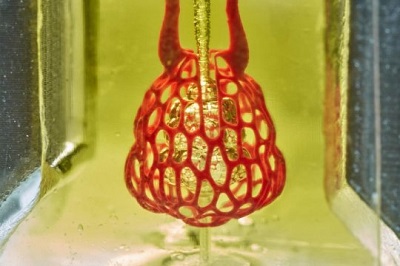 Scale model of a lung-mimicking air sac with airways and blood vessels. Source: Jordan Miller/Rice Universitysoft hydrogels one layer at a time. Layers are printed from a liquid pre-hydrogel solution that solidifies on exposure to blue light.

A digital light processing projector shines light from below, displaying sequential 2D slices of the structure at high resolution, with pixel sizes ranging from 10 to 50 microns. With each layer solidified in turn, an overhead arm raises the growing 3D gel just enough to expose liquid to the next image from the projector. Food dyes that absorb blue light are added as photoabsorbers, which restrict the solidification process to a very fine layer, producing soft, water-based and biocompatible gels with intricate internal architecture in minutes.

The system was used to form a hydrogel model of a lung-mimicking air sac in which airways deliver oxygen to surrounding blood vessels. Tests demonstrated the tissues to be sufficiently sturdy to avoid bursting during blood flow and simulated pulsatile breathing. Red blood cells were observed to take up oxygen as they flowed through a network of blood vessels surrounding the breathing air sac.

In another experiment, 3D-printed tissues featuring separate compartments for blood vessels and liver cells were loaded with primary liver cells and implanted into mice with chronic liver injury. The liver cells remained viable after implantation, indicating the successful production and effective performance of complex vascular tissues.

The research is published in Science.

Re: Watch a breakthrough in bioprinting replacement organs
#1

Magnificent. I am so pleased to see something so important being open source. I hope others follow this fine example.

Re: Watch a breakthrough in bioprinting replacement organs
#2

This is almost unbelievable, what is next? Within a few years our research and technology should be able to build an entire body that functions as a normal human being. Keep up the great work and many thousands of lives will be saved.